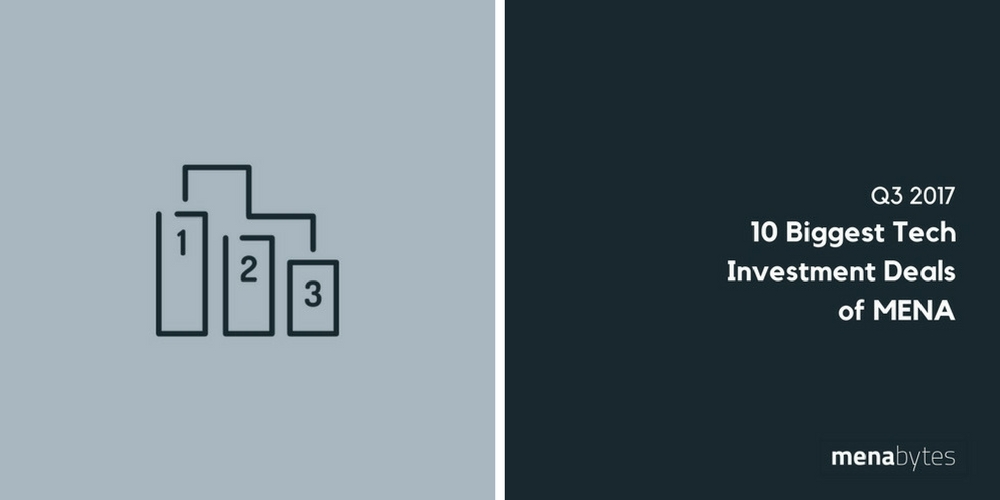 Since we started MENAbytes, we’ve been trying to track tech investments in the region, most of them through direct communication with startups, VCs & accelerators. We have been able to collect considerable amount of data. However not much has been done with it, yet. Starting today, we will try to change that presenting this data in meaningful information for our readers. Moving forward, we’ll be sharing regular quarterly investment reports and more.

We’re starting off with the ten biggest tech investment deals in the third quarter. A detailed report about the investments in quarter three which amounted to $168.1 million, will also be published in coming days.

The ten biggest investments in the region raised a combined total of $166.35 million with most of it coming from one massive deal of Starz Play.

The Saudi payments startup PayTabs received an investment of $20 million from undisclosed investors. It’s the largest ever round for a MENA-based FinTech startup. The startup plans to use this investment to expand into more than 20 markets over the next two years in the MENA, Southeast Asia, India, Africa and Europe. The funds will also be used for the product development and acquisitions.

Wego, the travel startup with dual headquarters in Singapore and Dubai closed a round of $12 million (or more). MBC Group and Middle East Venture Partners were the investors. The startup wants to use the money to expand its regional footprint. This round has taken total disclosed investment raised by the startup to $57.5 million.

Saudi restaurant management startup Foodics raised $4 million in its Series A. The investment was led by two Saudi VCs, Raed VC & Riyad TAQNIA Fund.  Naseel Holding & 500 Startups also participated in the round. It is one of the largest investment ever raised by a Saudi startup.

Kuwait-based online fashion marketplace raised $1.5 million in Series A round from unnamed investors. Co-founded by Kuwaiti entrepreneurs earlier this year, the startup had also raised a seed round of $200,000. This round takes the total investment raised by Nalbes to $1.7 million, all within eight months of founding the startup. Nalbes aims to use the investment to scale their business.

ArabianChain, the first regional startup that is developing public and decentralized platform for smart contracts on blockchain, raised an investment of AED 3 million ($816,771 to be precise).  All of it came from one investor,  Saudi-based Eng. Ahmed Abdullah Bugshan, Board member at the Arabian Bugshan Group and Vice President at House of Invention Intl. ArabianChain was launched in April earlier this year and is yet to make any revenue.

Amman-based POSRocket raised $650,000 from Jabber Internet Group, Propeller Inc., Arzan VC, and two angel investors. It sells  sells cloud-based point-of-sale solutions to small and medium-sized businesses. POSRocket’s a cloud-based point-of-sale platform that equips merchants with customizable interface to help them run their businesses in a smart way. The platform that runs on iPad is currently available in Jordan & Egypt. The startup intends to use this investment hire talent and expand to Gulf.

Swvl, a young Cairo-based transportation startup that connects commuters with private buses in the city received $500,000 investment from Careem earlier this year. Co-founded by a former Careem employee, Swvl aims to use this investment hire more people, and expand to more areas of Cairo, other Egyptian cities including Alexandria and some other Middle Eastern & Asian countries including Saudi Arabia, Jordan and Pakistan next year.

Eureeca is perhaps the most interesting investment deal in this list. The equity corwdfunding platform that helps startups raise money from a pool/crowd of investors, raised an investment for themselves through their own platform. It took them only six hours to reach the target of $400,00 and have now exceeded it by $45,000.

So, that’s about it in terms of biggest deal from the previous quarter. Watch this space for the detailed investment report of Q3 2017. You may want to follow us on Facebook, Twitter & LinkedIn to receive the latest updated. Also, subscribe to our newsletter below which should be starting very soon.