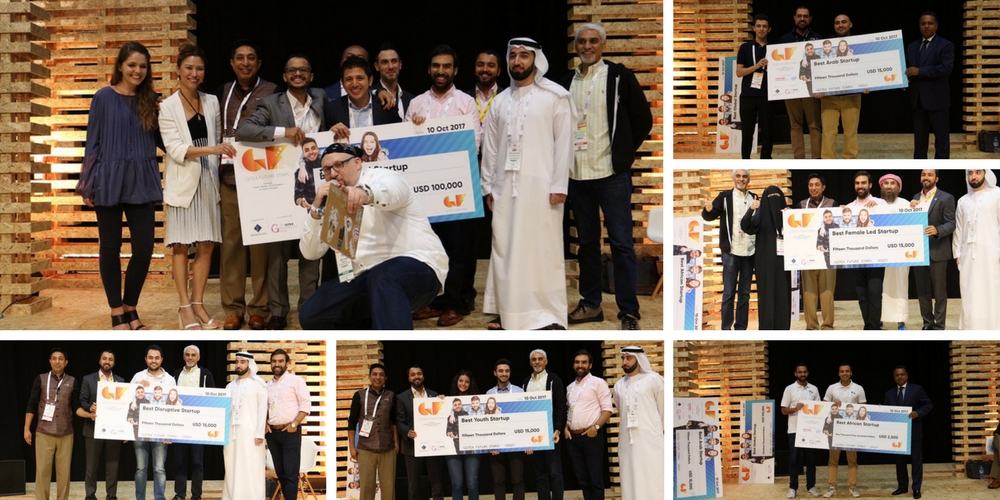 GITEX Future Stars, the on-going startup event in Dubai that is one of the largest in the region brought some really cool startups from all over MENA that exhibited their products, met investors and took part in different competitions. The event runs parallel along GITEX Technology Week, one of the largest ICT expos in the world. For both the events, today is the last day. GITEX Future Stars had it’s flagship pitch competition on Tuesday, the third day of the event and the following were announced as winners in different categories.

Co-founded by Mustafa Moussa, Ahmad Delwah & Edward Canepatwo, Sadeem is a Saudi-based startup that specializes in flood sensing system for smart city applications. The startup that started as a research project at King Abdullah University of Science & Technology has developed multi-patented monitoring system which displays physical phenomena occurring in the city including flash flood maps, traffic maps and pollution maps in real time. The monitoring can help city planners and other decision-makers take better decisions in city planning, development, and operations. But more than anything else, Sadeem’s system could help save lives during a flood incident and reduce economic losses by up to 30%. The stratup has rightly won the award of Best Global Startup at GITEX Future Stars, taking home the prize money of $100,000 with them.

Melltoo, the ‘no-meetup-classifieds’ startup co-founded by Sharene Lee & her husband Morad Irsane won the award of ‘Best Female Led Startup’ with the prize money of $15,000. Melltoo is a marketplace that allows people to buy and sell second-hand things through its web-based platform and mobile apps for Android and iOS. Available in UAE & Saudi, the startup facilitates payment and delivery as well making it possible for users to buy and sell things without having to leave their homes. Melltoo has raised more than $1 million in funding from regional VCs including Raed VC & MEVP.

Lebanese startup Cherpa was declared the Best Youth Startup winning  $15,000. Co-founded by Ibrahim Ezzeddine & Basel Jalaleddine, Cherpa is an online platform that teaches robotics to the youth in a fun and interactive way.
The platform manages and organizes how robotics and electronics classes are taught in universities and schools. The original product of the startup was an interactive board which helped engineer in debugging the circuit, detecting errors and guiding them in connections but having realized that it cannot be used as an effective tool for learning by students and it won’t be an affordable product, the founding duo pivoted and launched the platform. Cherpa also won the SeedBoost Competition earlier this year at Speed Lebanon.

Another Lebanese startup Modeo also won $15,000, winning the title of Best Disruptive Startup. Founded in 2015 by Emile Arayes & Aline Gemayel, Modeo lets people design and build their own custom furniture using their mobile app and interlocking modular parts. Furniture can be designed on their app from scratch or using an existing template from their catalog. It can then be visualized at any place using augmented reality. The designed furniture can be ordered within the app in form of parts which are delivered in small and lightweight boxes. Both Cherpa and Modeo have graduated from Speed Lebanon’s acceleration program earlier this year.

Mind Rockets from Jordan was crowned as Best Arab Startup with the prize of $15,000. It develops assistive technological solutions for the deaf & hard of hearing worldwide. Mind Rockets has developed Android and iOS applications for both American & Arabic sign languages. The applications interpret spoken and written English & Arabic into the two sign languages using different 3d avatars. Co-founded by Mahmoud Al-Darawsheh and Mohammad Al-Kilani, Mind Rockets has been the winner of different other awards as well.

Travel Dog, a startup that claims to be the modern etravel agency won the title of Best African Startup, winning $2,000. There’s not much information available about the startup online, even their website seems to be going through some sort of upgrade. The address listed on the website is of London so we’re not really sure how it qualifies as an African startup. But from an explainer video available on GITEX Future Stars website, Travel Dog aims to be the smart travel agency which offers tailored trip itinerary, personal booking assistant, virtual travel companion, safety map, tour marketplace and more.  It seems that it’s only an idea at this point as their domain was registered only three months ago and they don’t have the presence on any social media channels.