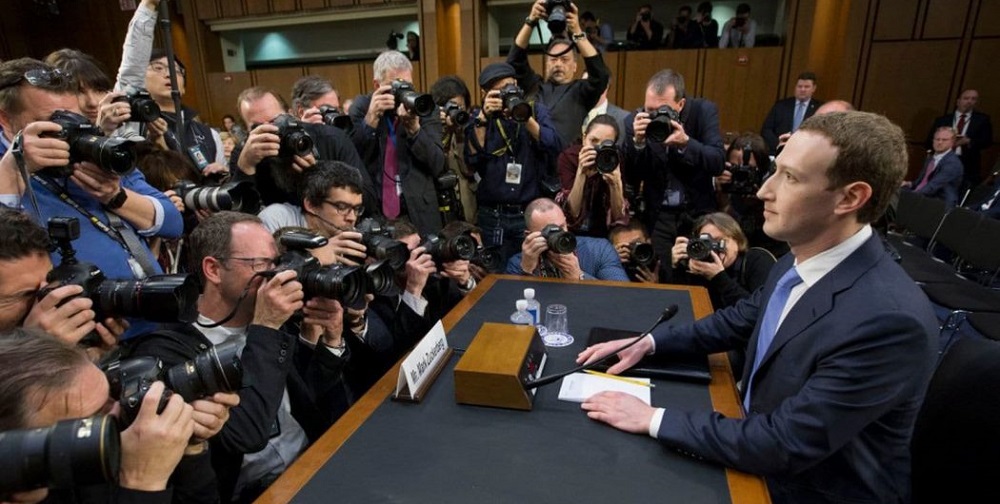 Facebook’s founder and CEO Mark Zuckerberg appeared before the US Senate’s Commerce and Judiciary committees yesterday to answer questions of 44 senators about Cambridge Analytica scandal, Russian disinformation on the social network, and data privacy. The sessions lasted for more than five hours where each senator was given five minutes to question Facbeook CEO.

The testimony was broadcasted and livestreamed by almost every leading news organization of United States and watched by people across the world including myself.

These are some of the biggest highlights from the hearing in no particular order.

1) Zuckerberg caught off-guard when asked about his own privacy

The Facebook CEO was asked by a senator if he would be comfortable sharing the name of the hotel he stayed in last night. That’s how the senator started his five minutes and it took Zuckerberg off guard. There was an awkward silence and “Umm. Uh” before he answered with a no. The senator then asked him if he would share the names of people he has messaged this week and Zuckerberg obviously said no again, to which senator responded, “I think that may be what this is all about: your right to privacy, the limits of your right to privacy and how much you give away in modern America in the name of connecting people around the world.”

Sen. Durbin presses Zuckerberg on privacy issues, asking: "Would you be comfortable sharing with us the name of the hotel you stayed in last night?" Zuckerberg laughs and says, "No." https://t.co/BBFW9ch3Xd pic.twitter.com/KIuv1LBwpC

There were some great questions but many senators had not done their homework. Some didn’t even have basic understanding of how Facebook and its products work. One of them kept referring to WhatsApp messages as emails. He asked Zuckerberg, “If I’m e-mail — if I’m mailing — e-mailing within WhatsApp, does that ever inform your advertisers?”

Another one asked the Facebook CEO about its business model in which users don’t pay for the service to which Zuck responded, “Senator, we run ads.”

The best of the lot was when one of them asked him about the number of data categories they store. Zuckerberg was absolutely clueless about what exactly was the question referring to and rightly so. It didn’t make any sense. The senator herself had no idea what she was trying to ask.

This has probably nothing to do with confusion but it is still wroth mentioning. One of the senators complained to Zuckerberg that after communication with his friends on Facebook and indicating that he loves a certain kind of chocolate, he, all of sudden started receiving ads for the chocolate. He asked Zuck if there was a way to stop those ads.

3) Some of the senators absolutely roasted Zuckerberg

Even though Zuckerberg looked pretty confident throughout the hearing and was able to answer (or dodge) most of questions easily, some senators absolutely roasted him. Apart from Dick Durbin who proved his point about privacy by asking Zuckerberg if he would be comfortable sharing the name of the hotel he stayed in last night, there was Graham who pressed him hard about whether Facebook is a monopoly.

Watch Mark Zuckerberg and Sen. Graham go back-and-forth about whether Facebook has a monopoly #tictocnews pic.twitter.com/bQvzfUTkTo

"Here's what everybody has been trying to tell you today and I say this gently: Your user agreement sucks.The purpose of that user agreement is to cover Facebook's rear end. It's not to inform your users about their rights," @SenJohnKennedy blasts Mark Zuckerberg. pic.twitter.com/PJntv00rnP

Kamala Harris unlike many other senators did not allow Zuckerberg to dodge her question about whether a decision was made not to inform the users when Facebook first became aware of December 2015 that Dr. Kogan and Cambridge Analytica misappropriated data from 87 million Facebook users. Zuckerberg tried to deviate from the question but eventually sort of admitted that it was decided internally not to inform users about the breach.

Senator Kamala Harris drills Mark Zuckerberg about decisions to not inform Facebook users about the Cambridge Analytica breach at the time pic.twitter.com/AhafI1pKBK

Zuckerberg dodged a lot of questions during the hearing, some with clever answers and some by just saying that he will have his team followup afterwards. One of the most important questions that he dodged was about Facebook tracking users’ internet browsing activity after they log out.

5) Paid version of Facebook is very much on the cards

Earlier this week, Facebook’s COO Sheryl Snadberg during one of her media appearances said that Facebook is exploring the idea of a paid version of their website that would allow users to have an ad-free experience. Zuckerberg during the hearing, answering one of the questions, said, “There will always be a version of Facebook that is free.” This only confirms what Sandberg said earlier this week.  Previously the company has always maintained that the stance that their service will always be free, which is obviously not the same thing as saying that a version of Facebook will always be free.

It has been reported multiple times by different media outlets that Facebook uses microphones of mobile devices to learn what people are talking about and then show them on ads related to that on the website. Zuck was asked about this theory and he stated the company does not do that. He went on to explain, “To be clear, we do allow people to take videos on their — on their devices and — and share those. And of course videos also have audio, so — so we do, while you’re taking a video, record that and use that to make the service better by making sure that your videos have audio.”

Facebook CEO during the hearing said that they are using AI tools to monitor and remove different types of content on the platform and they’ve reached a level where they’re able to take down 99 percent of ISIS and Al-Qaida related content without anyone flagging it for them.

“We’ve prioritized the most important types of content that we can build A.I. tools for today, like terror related content, where I mentioned earlier that our systems that we deploy; we are taking down 99 percent of the ISIS and Al Qaida-related content that we take down before a person even flags them to us.”

A question about Facebook’s role in Mayanmar genocide was brought up by a senator, who said, “U.N. investigators have blamed you — blamed Facebook for playing a role in the genocide. We all agree it’s terrible. How can you dedicate, and will you dedicate, resources to make sure such hate speech is taken down within 24 hours?”

Zuckerberg answering the question pointed out three things that the company is doing to deal with this; “hiring dozens of more Burmese-language content reviewers because hate speech is very language-specific, working with civil society in Myanmar to identify specific hate figures so we can take down their accounts rather than specific pieces of content, setting up a product team to do specific product changes in Myanmar and other countries that may have similar issues in the future to prevent this from happening.”

There was obviously a lot more in five-hour hearing. Zuckerberg was asked questions about regulating the company, about laws around use of digital media for minors, Facebook’s role in elections and a lot more. It had more drama than The Social Network (the movie about Facebook) and according to many, Zuck came out as a winner. If you would like to learn more, you can read the full transcript by The Washington Post here.