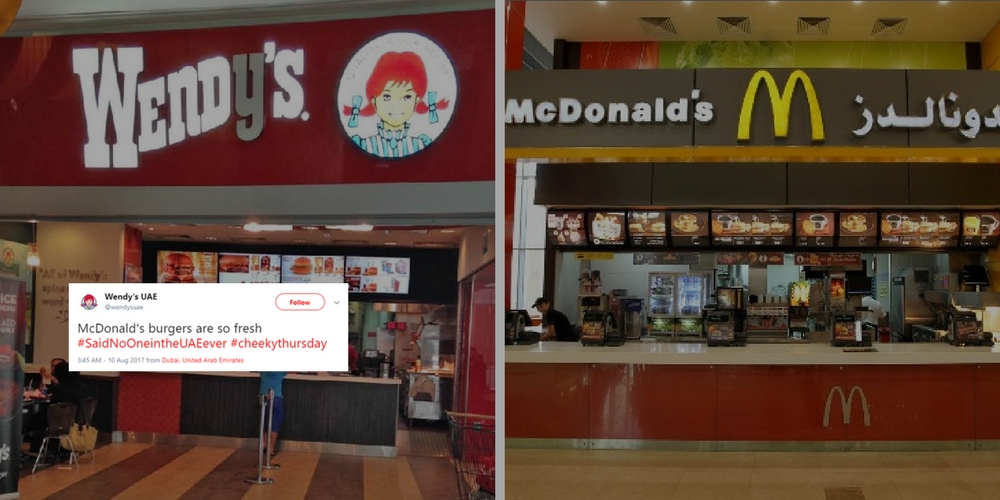 Wendy’s is a fast food chain that is known for creating buzz on social media especially Twitter. They’re known for their cheeky responses to tweets that would normally go unanswered by most of the brands on Twitter. Earlier this year a teen asked them about how many retweets would it take, for him to win free supply of chicken nuggets and they responded with 18 million. Teen shared the tweet asking for people to retweet it and his call was answered by millions to make, making it the most retweeted tweet of all time with more than 3.6 million retweets as of now.

HELP ME PLEASE. A MAN NEEDS HIS NUGGS pic.twitter.com/4SrfHmEMo3

Yes, he didn’t really get to 18 million retweets but being on top of most retweeted tweets was enough for him to win his nuggets.

.@carterjwm is now the most retweeted tweet of all-time. That’s good for the nuggets, and $100k to @DTFA. Consider it done. #nuggsforcarter pic.twitter.com/k6uhsJiP4E

Now the same Wendy’s which is not very popular in UAE joined  #SaidNoOneEverInTheUAE, a trending hashtag to take a dig at MCDonald’s UAE.

People were not willing to let it go.

No one in uae knows you 😂

But Wendy’s UAE always had a comeback.

Some were really impressed.

I thought only the American Wendy's is a savage

The ‘burger wars’ reference was made.

And I'm not picking sides, but I'm definitely hitting @McDonaldsUAE on Saturday for a #milkshake.

come to @wendysuae and your Nutella Frosty is on us 😘

Before all of this McDonald’s had also made their attempt on joining the fun.

It's late and all restaurants are closed! #SaidNoOneintheUAEever

In the end it was all in good humor.

hahahah it's all fun and buns 🍔