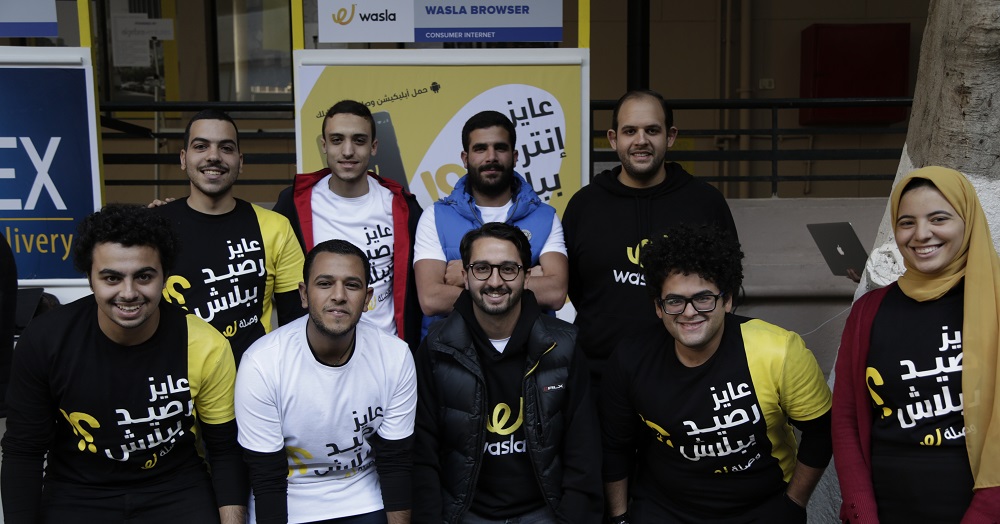 Cairo-based Wasla has raised $180,000 in pre-seed funding from a group of angel investors led by a Cairo-based investment banker Omar Barakat, the startup told MENAbytes in an interview.

Founded earlier this year by former Rocket Internet entrepreneurs, Serag Meneassy and Taymour Sabry, and Mahmoud El Said, an investment anker who had initially joined as an investor in the bcompany, Wasla is an Android mobile browser that provides users with free internet through subsidizing data costs by leveraging digital ads.

The company had been working in stealth mode for almost one year before launching the browser at the 2018 Rise Up Summit in Cairo this week.

Wasla gamifies the experience by allowing users to freely surf the internet while completing in-app missions and actions to earn points – the points can then be exchanged for free mobile data and airtime directly from Wasla. The company has some local payment partners on-board with them to make this happen but wouldn’t share details.

“Users earn points for doing the things they do online everyday, visiting their social media profiles, watching videos, reading articles and surfing the web in general. We created a reward logic for every action the user performs and is weighted depending on importance – for example, sharing with a friend is more important than opening a notification,” explained Serag Meneassy, Wasla’s co-founder in an interview with MENAbytes.

After downloading Wasla from the Play Store on their Android device, users have to create a Wasla account, sign in and they’re good to go. They can use Wasla like any other browser and earn reward points in the process. The browser also comes with a localized home page in the form of a feed displaying content aggregated from over 200 sources including articles, videos and more.

“We have built a proprietary content aggregator system that matches users interests to specific content. There is also a human element to it with a dedicated content team that supervises, trains and makes sure we are adhering to our strict content guidelines,” said Taymour Sabry, Wasla’s co-founder in an interview with MENAbytes.

Wasla claims that all their ad formats are non-intrusive so users don’t have to watch a 15-30 second video ad before they could close it to continue browsing, “We are mainly focused on three ad formats: banners, native ads and interstitials all of which are placed and optimized to give our users a smooth browsing experience,” noted company’s co-founder Serag.

Starting with Egypt, Wasla aims to connect over 500 million people to internet across Middle East and Africa. They plan to roll out the browser to other emerging markets including Nigeria, Ethiopia, and Saudi Arabia and are already in talks with local partners in these countries. The company also has some complimentary products in its pipeline that they plan to launch in the short term.

Speaking about how big the opportunity is, Mahmoud El Said, Wasla’s co-founder in an interview with MENAbytes, said, “Egypt alone offers a massive opportunity. Over 97% of households in country have access to mobile internet, while only 42% have access to ADSL, which leaves almost 55% of households reliant on mobile internet only. More specifically, Wasla’s target market comprises of prepaid smartphone users between the ages of 13-40 which represents almost 50 million people.”

Starting with Egypt, Wasla aims to connect over 500 million people to internet across Middle East and Africa. They plan to roll out the browser to other emerging markets including Nigeria, Ethiopia, and Saudi Arabia.Click To Tweet

“Advertisers still heavily rely on traditional advertising channels such as TV, Billboards and Radio – even though consumer habits have significantly shifted towards digital and mobile channels; with the average Egyptian spending over 26 hours a week online through their mobile phone. This represents an unprecedented opportunity for a consumer internet product for the masses; which Wasla Browser plans to fill.” explained Serag.

The two co-founders Serag Meneassy and Taymour Sabry, apart from working for Rocket Internet had also co-founded a bot building platform Botler.io in 2016, which was recently shut down. Serag and Taymour say that their time with Botler and Rocket Internet has taught them the importance of building a customer-centric product that solves a real world problem and that’s what they’re trying to do with Wasla.

The company currently has a team of 12 working from its Cairo office. Wasla plans to take this number to 25 by adding more people to its engineering and marketing teams.

They plan to use the investment to gain initial traction, build their user base, and build the necessary marketing and technology infrastructure required to take their product regional.

After launching at RiseUp, Wasla has already attracted over 2,000 users organically in less than 48 hours which has earned them the second spot on Google Play Store’s Trending Apps. They obviously have a long road ahead but this seems like a very decent start.