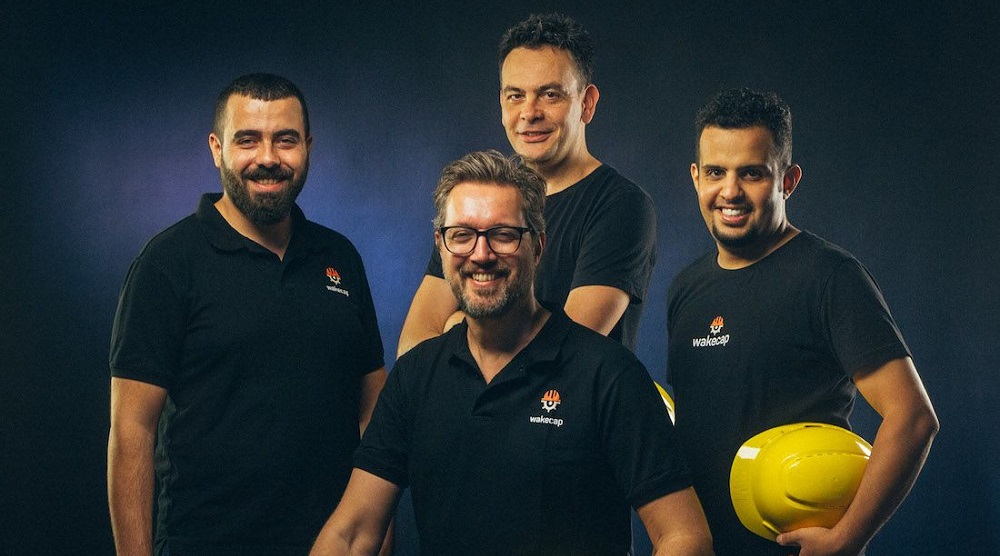 Construction is one of the biggest industries in the Middle East. At any given time, there are billions of dollars being put into construction projects in United Arab Emirates, Saudi Arabia, Oman, Qatar and many other countries of the region.

What’s interesting, however, is that we hardly see any regional startups creating products for this multi trillion dollar industry that continues to use tools and solutions created tens of years ago.

There are so few regional startups in this space that you can probably count them on your fingers.

WakeCap is one of those ambitious startups.

Co-founded last year by a team of engineers and industry experts including Hassan Albalawi, Ishita Sood, Badis Glaied, Roy Gilsing, Rene Wassenburg, and Rami Nassouh, it is betting big on the construction industry with its safety and tracking IoT device that comes integrated with construction helmets with an aim to improve the productivity and safety of workers on any construction site.

The startup has just raised $300,000 from CCC (Consolidated Contractors Company), a construction group with working on projects across Middle East, Asia and Africa. The investment is part of $1.5 million round that WakeCap aims to close in the next six months. Apart from this $300,000, WakeCap already has commitments for another $400,000 from some regional VCs.

The device also enables a two-way alert system between workers and their supervisors to ensure effective site evacuations and field reporting.

WakeCap apart from integrating its sensors in the helmet creates a wireless mesh-network (with the same sensors) by placing nodes all over construction site to connect and track not only people but tools and equipment as well.

Hassan Albalawi, the co-founder and CEO first thought of the idea when he was met with an accident that almost killed him. He was inspired to create create something that could help detect drowsiness levels of workers involved in heavy labor at construction sites and that’s how WakeCap had started.

“The concept since then has been evolving without leaving the scope of solutions aimed at improving the productivity and safety levels at construction sites. WakeCap’s mission has always been centered around empowering the workers with technology,” Hassan tells MENAbytes.

“Starting from drowsiness detection to heat-stress management and ending up with digitizing processes and connecting workers, the different stages of what our team tried to accomplish tells the story of how WakeCap gradually understood what the construction industry requires from technology at this day and age,” he adds.

WakeCap is currently implementing its first pilot project, the Opera Grand Tower in Downtown Dubai which is a ~$136 million (500 million dirham) project by Emaar being constructed by WakeCap’s investor CCC. WakeCap’s co-founder Ishita Sood sees the implementation of this pilot as their biggest achievement yet.

“We recently moved our headquarters into Opera Grand Tower Project (OGTP) where WakeCap’s CCC pilot is taking place. This mega-project will witness WakeCap’s pilot implementation at its 70-story Opera Grand Tower Project in Dubai where the management will be able to achieve total worksite visibility over their 400 workers, improve communication and injury response times, as well as reduce time spent on collecting data on worker attendance, location and project progress. All hands are on deck to make sure this pilot is a massive success,” she tells us.

Getting to this point has not been very easy for the eight member team of WakeCap, some of whom are working remotely from Netherlands and Lebanon. The startup has faced a lot of challenges in the last few months, with raising investments being on top of that list.

“Investors in the MENA are reluctant to back hardware startups and that has been our biggest challenge yet,” Ishita explains. “Investors are mostly worried about the problems that frequently arise when mass producing hardware which could ultimately cause a startup to fail.”

That’s when they decided to apply for the HAX that claims to be the largest hardware accelerator in the world. Fortunately for them, WakeCap’s application was accepted. They joined the program in Shenzhen (China) last year where they also received $175,000 as their first investment.

Earlier this month, they were declared winners of the the Dubai Smartpreneur Competition, a Dubai Chamber backed competition that was part of ArabNet Dubai.

WakeCap makes money by selling the helmets integrated with their sensors and a weekly, monthly or annual subscription fee for rest of the solutions based on number of workers, total area of the project, and desired features.

CCC, their first investor sees them as a strategic partner.

“WakeCap’s vision combined with our domain knowledge was a clear call to a strategic partnership that will help source innovation into our company and at the same time contribute to a product that is set to disrupt the traditional construction site operations,” Aref Boualwan, Manager of MIS and Business Process Reengineering with CCC tells MENAbytes.

The startup plans to use latest investment on R&D and finalizing the new design of their products. They’re also expanding the team to develop the software solution in-house. They also plan to roll out more productivity features including tracking tags for machinery and equipment which would help project managers keep track of the moving parts in real-time.

Even though WakeCap is a global product, they’re completely focused on Middle East right now with no plans to expand beyond the region anytime soon, Hassan explains.

He thinks that construction is just a starting point. WakeCap’s technology can be used by many other industries including mining and petroleum.

“Our solution leverages sensors, asset tracking, analytics and wearable technology to more effectively execute the work activities of an industrial or field worker and therefore can be adapted to other sectors like the mining or the petroleum industries to help reduce non-productive work, create a safe work environment, automate workflows and improve efficiencies ultimately improving the bottom-line.”

WakeCap is not the first company that is trying to improve the construction site operations by using technology to collect meaningful real-time data. There are many others including some big names that have built similar products but what sets WakeCap apart is the fact that its helmet integration is almost invisible to workers as they are already required to have their helmets equipped at all times while on site.

It is way too early to predict the future of WakeCap but given their great start, brilliant team, and the magnitude of problem they are going after, to me, it looks very promising.