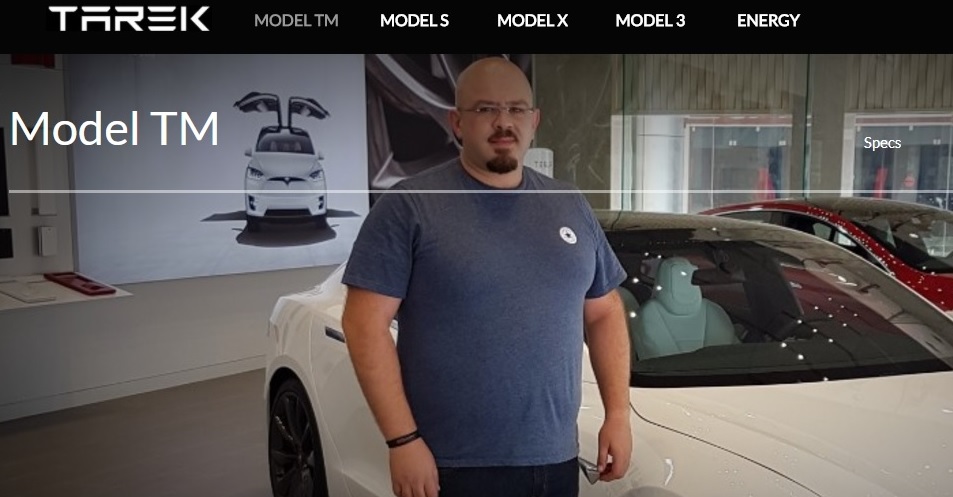 Tarek ElMoukachar, a Dubai-based Communications Specialist has created a website called Tarek4Tesla.com to pitch himself for a possible job with Tesla. Born and raised in Australia, Tarek moved to Dubai in 2004 has been working in different PR & communications roles all these years. After being let go from his job earlier this year, he is currently working in a temporary role in Abu Dhabi.

With Tarek4Tesla.com, he is pitching himself as a candidate for a possible PR/Communications role that has never been announced by Tesla.

“Tesla is one of those companies that is making a massive change to the world and I want to be part of it or similar organization. It is a place where imagination turns to reality, and a company that is so advanced in my two passions, cars and technology.” said Tarek, speaking to MENAbytes.

Website is not his for attempt to apply for a regional position with Tesla. He has earlier tried reaching out directly to Elon Musk on Twitter.

“Back in February, when Tesla announced the opening of their Dubai Showroom, I tweeted #Tarek4Tesla asking Elon Musk if the company needed a PR person in the region – no reply. Since then, I would check their website daily. I also reached out to a recruiter from Tesla via LinkedIn, but was told that any openings  would be posted on the website.” he told us.

He earlier wanted to send a presentation printed on ‘seed paper’ to Tesla HQ in United States but decided against it when idea of the website came to him; with which he positions himself as a Tesla product, Model TM. Using Site Builder, it took him about four weeks to build him the website as there were few problems with the mobile version.

The five-page website does not have any details about how exactly he could help Tesla with their Communications strategy in the region but that’s only because he doesn’t want to share it publicly yet. Also, he did not want to have more-than-required content on the site.

“In my experience, a website loaded with too much content to read will bore the visitor. I was even hesitant about including my CV (under Specs) as it’s text heavy. However, I left it there in case any recruiter wanted to read it – my experience coupled with my passion for the auto and tech industries makes me the ideal candidate.” he said. “I conducted an online audit for Tesla in the region, and put my findings, along with the reasons why they need a communications person, and why I would be the best person for the job in a document and shared that directly with the Tesla recruiter on LinkedIn.”

Tarek told us that he’s not holding his breath at this stage as the job is not even listed and he would be happy even if someone from the company just comes forward to acknowledge his efforts.

“If the company falls into my top list that I check regularly for opportunities, then yes I would consider them.” he said when asked about whether he will consider any other opportunity that might come his way because of the website.

Tarek who had announced the website in a Linkedin post on his profile earlier this week is very happy with the initial response and is grateful to everyone who has appreciated the effort.

“In first 12 hours, the website had 1200+ page views and a bounce rate of 25.5% so the majority are clicking through the website to know more. I have had many friends and family share, retweet and post the website link. Some have even tagged Tesla Motors and the Elon Musk to give me the job.” he told us.

It’s not the first time a MENA-based Professional has created a website to pitch themselves as a candidate for a technology company. In 2015, Nina Mufleh had launched Nina4Airbnb.com, a website-resume that got a lot of attention and media coverage. It even received appreciation from Airbnb’s CEO Brian Chesky. Even though Nina could not land a job with Airbnb, she was approached by different recruiters and was eventually hired by Upwork as a Growth Manager. Nina however was in San Francisco at the time of launching her initiative.

Tarek may or may not find a job with Tesla. But we at MENAbytes commend his efforts and hope that they translate into something really good for him. It’s not everyday that you come across individuals who actually do something to stand out from the crowd.