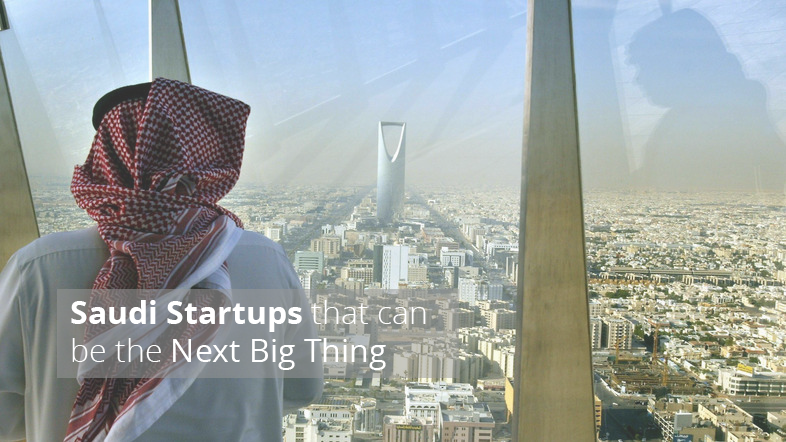 Saudi Arabia ranks 94 on World Bank’s Ease of Doing Business Index so its obvious how difficult it is to start and maintain a business here. Ask any Saudi entrepreneur and they’ll tell you about how difficult it is to incorporate their business in the Kingdom and it doesn’t end there. For startups, there has to be an ecosystem. All the stakeholders have to come together in a way that helps each one of them grow but unfortunately Saudi still lags behind in terms of having an ecosystem even half good as UAE. But that has not stopped the entrepreneurs in the country, their spirits are still high and they’ve been kind of on a roll lately. ArabNet Startup Championship, the Best Arab Startup at GITEX at 2016 and so many other titles have been won by Saudi startups and entrepreneurs. Today, we are going to share five Saudi startups founded or co-founded by Saudi entrepreneurs that we think could make it really big.

This list in no way suggests that these are the five best Saudi startups out there or there’s not other Saudi startup that cant make it big. Also, they are not ranked in any particular order. You’re most welcome to share you thoughts in the comments below.

We’ve been seeing a lot of MENA-based startups showing interest in delivery of goods. Careem has launched their own delivery service recently in Saudi, Fetchr has fetched $41 million in its Series B funding and Souq.com has invested in Wing.ae, a delivery startup based in UAE. Sprent is also working in the exactly same area trying to take a pie from the deliveries market in Saudi Arabia. Co-founded by two young Saudi bankers-turned-entrepreneurs Fahd Altwairgi & Ali Alobaid, Sprent has been operating since last year; way before Careem started its delivery services in Saudi.

What Sprent does is connect customers with one of their Sprenters (Drivers) who after taking order and description of what customer needs goes to a store (recommended by the customer), buys that particular item and then delivers it to the customer. It could be anything; from a burger to a 60-inch screen TV and they claim to deliver it within 59 minutes. To read more, check out this story we published about them earlier this year.

Cura is a healthcare startup that connects people with doctors through its mobile application. But unlike other mobile applications and startups from the region which help you book appointments through their platforms, Cura lets you speak to the doctors right within its application. You can chat with the available doctors or have a voice/video call with them. Co-founded by Wael A. Kabli & Mohammad Zekrallah, the Riyadh-based startup already has 150 verified doctors form 34 different medical specialties on its platform and has been offering 432 monthly consultations on average.

The startup charges a consultation fee for speaking to any doctor and has a premium subscription model as well which offers patients to speak to the available doctor on call 24/7 without any consultation fee and offers discount if they would like to speak to a doctor of their choice. Currently offering its services in Saudi only. Cura has plans to expand into other MENA markets as well. They were the winners of Best Early Stage Startup title at the recently concluded Step Conference in Dubai, United Arab Emirates.

Launched in 2013, DokkanAfkar is an ecommerce platform that sells unique and innovative products. From home decor to stationary, they sell a wide range of products. Products that you would normally not find on conventional ecommerce platforms or even in the local markets. Co-founded by Ammar Waganah who currently serves as CEO, DokkanAfkar is currently based in Jeddah and delivers all across the Kingdom using services of SMSA & Aramex.

They promote the local designers, brands and SMEs to sell their products on the platform. One such brand is Fyunka that sells handbags and accessories designed by a local designer Alaa Balkhy who happens to be a Socila Media Influencer as well. The startup has recently closed a $2 million investment round led by Riyad Taqnia Fund which to our knowledge is the largest investment in any Saudi tech startup yet. They’ve previously received an undisclosed investment from Mobily Ventures in 2015.

Providing roadside assistance services, Morni was founded in 2015 by Salman Al-Suhaibney. Why he founded the startup is an interesting story but not for today. What they basically do is help if someone’s car breaks down. Their applications let users request roadside assistance in shape of towing, battery service & replacement, tire change & repair & locksmith and fuel delivery.

When started, it was aimed at individuals only but now Morni has corporate clients as well which includes different local car dealers offering Morni services when selling new cars. In two years only, they have come a long way. Their Android & iOS applications have been downloaded more than 600,000 times with more than 200 requests being served on daily basis. The startup has received $1.1 million in funding from Raed Ventures. To know more about them, you can check out this story we published about them few months ago.

Uxbert Labs is the first UX, Usability, Ecommerce Research, Design & Testing Consultancy in Saudi Arabia. Co-founded by Nadeem Bakhsh, Yousef Shanti, Faheem Bakhsh & Farrukh Bandey in 2012, it was initially based in Dubai but moved their base to Riyadh in 2014. They’ve worked with both businesses and governments in the country. Some of their clients include big names like STC, Accenture, Mobily, Microsoft in the Kingdom.

But that’s not it. Uxbert Labs is much more than that. Apart from the regular business, they’ve launched their own applications as well which include Sawwagy – the personal driver app which won Best Arab Startup at GITEX 2016, Needa – an app for on-demand services & HalaYalla that lets you plan and organize social activities. Think of all thse applications as startups within a startup. They may have not achieved great things in terms of traction but with the team and resources Uxbert Labs has, one of them just might take off big time.