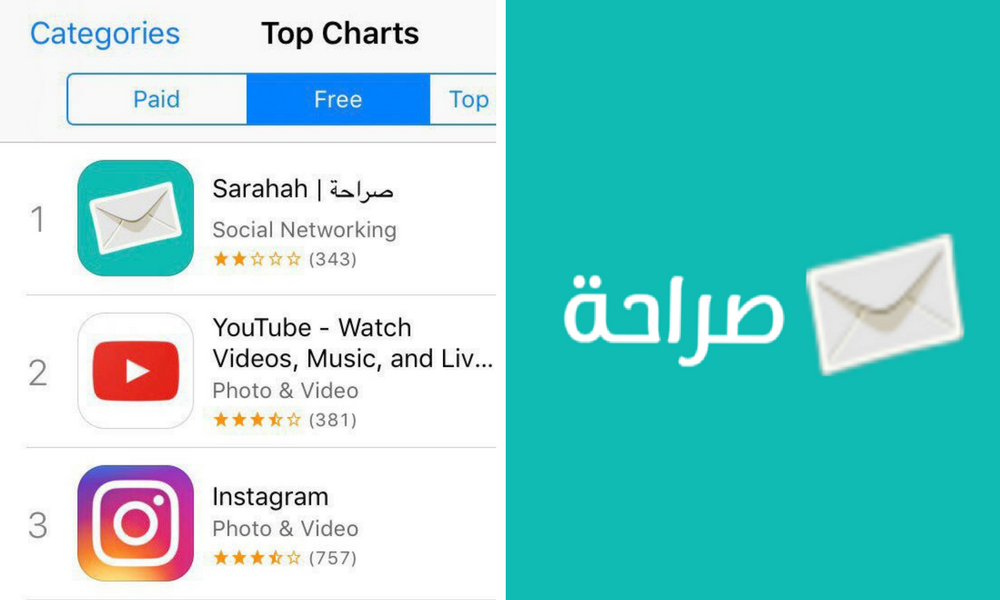 Sarahah is an anonymous messaging platform founded by a ZainAlabdin Tawfiq, a Saudi national. Launched earlier this year, the website went viral in different MENA countries including Egypt, Saudi & Tunisia. People created their profiles on the platform and started sharing links of their profile on different social networks to ask their friends and followers for anonymous constructive feedback about themselves.

Within few weeks only, the website reportedly had 20 million users and 270 million pageviews. According to stats available on SimilarWeb, the website has been getting 25-35 million monthly visits for the last few months. Most of these visits come from Egypt followed by Tunisia & Saudi Arabia.

After the massive success Tawfiq received in early days of the website, he went on to launch Sarahah applications for both App & Play Store. What he had no idea about however is that his app which arrived on the App Store in June would go on to become the No.1 Free App in the World beating the likes of Facebook, Youtube, Instagram & Snapchat. The platform that was only limited to Arab countries earlier has not taken the whole world by storm. It has been receiving a lot of attention from the international publications since reaching the No.1 spot on App Store.

Most of the international publications have been writing about how the app is becoming a playground for bullying people online. Quoting different reviews on the app, the Business Insider writes about it with the headline: The top free app in the App Store right now is being called ‘a breeding ground for hate’. The Independent also covers the same angle: The top iPhone App in the World is being used to bully people. Metro also wrote about it: Has the Sarahah app become a tool for cyberbullying?.

Since the launch, the platform has received mixed reviews from people with some calling it a tool to bully people online and some appreciating it as they’ve actually received honest feedback on it.

Tawfiq in different interviews has said that he made Sarahah to help people receive honest feedback and constructive criticism about themselves and that at the end of the day, its upto the user himself whether he would like to install the app or not.

We’re not sure if the app is only being used to bully people but one thing is for sure it has gone beyond MENA as international users have also started using the app. Whether this turns out to be a fad or a long-term success for the Founder of the app remains to be seen. But for now, he seems to be enjoying the success as it is perhaps the first time a MENA-based app has made it to the top of App Store.