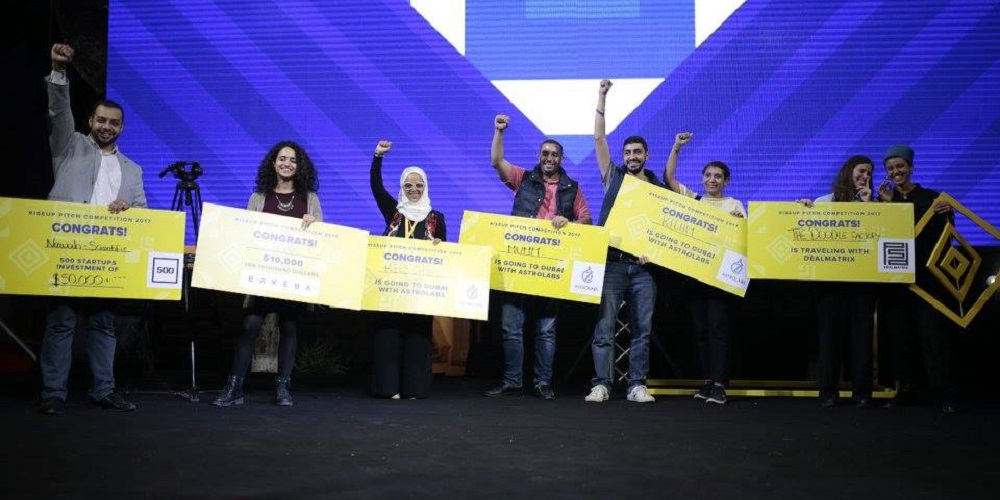 RiseUp brought about 5,000 entrepreneurs, investors and startup enthusiasts from the region and beyond in Cairo for its three-day summit. The summit also hosted more than 150 startups participating in different activities at the summit. One such activity was the RiseUp Pitch Competition. Tens of startups from Egypt and rest of the region participated in it with only ten making it to the finals. The ten finalists were given the opportunity to pitch again at the main (capital) stage in front of audience at the closing ceremony on day three of event. Every startup had three minutes to pitch their products and services and another three minutes to answer the questions of judges. Eventually, the following six came out as winners.

The biggest prize at the competition was from 500 Startups. An investment of $50,000. Yeah, technically not a prize but still a pretty big deal considering the fact that investments for early-stage startups are not that easy to come by. A Cairo-based science startup Nawah Scientific was declared the winner. It’s a private, multidisciplinary research center that claims to be the first of its kind in Egypt and caters for natural and medical sciences. Founded by Omar Sakr, a PhD from University of Geneva, Nawah has 400m2 lab facility in Cairo with high-tech research equipment, an online platform, and a strong logistics network to provide different services to researchers in the region. The startup will have to go through the due diligence process by 500 Startups to eventually land the investment.

Orcas, the Cairo-based marketplace for babysitters and tutors won the best prize, $10,000 cash by Bakery, a growth market early stage investment and ecosystem building platform by Abraaj Group. Unlike Nawah, they won’t have to go through due diligence or give-up any equity. They went home with $10,000 and that’s it. No strings attached. Co-founded by Hossam Taher, Amira El Gharib, Omar Fayez and Ahmed Ismail in 2013, the startup connects parents with vetted babysitters and tutors through their mobile applications for Android & iOS. Initially started as a Facebook page, Orcas has sold more than  15,000 hours in babysitting and tutoring help until last quarter this year.

The Doodle Factory
Prize: Trip to a European Tech Conference by DealMatrix

The Doodle Factory was given the crowd crown after winning the highest rating from RiseUp attendees among all the finalists for pitch competition. The attendees rated all the finalists by voting with the RiseUp mobile apps. The Doodle Factory’s team has won a trip to a European Tech Conference by DealMatrix. The conference could be Web Summit, Slush, Tech Open Air or any other leading European tech conference. Co-founded by Yasmeen Khamis and Farah El Masry, The Doodle Factory manufactures different lifestyle products from drawings made by children. The startup works with different organizations to inclusively empower vulnerable children. The startup uses their revenues to constantly fund different medical and educational projects for the same children.

KeesChic
Prize: Trip and Stay in Dubai by AstroLabs

Saudi startup KeesChic was one of the three winners to win a trip and stay in Dubai sponsored by AstroLabs. Jeddah-based startup manufactures different handmade products by employing local women from disadvantaged backgrounds. All the KeesChic products are manufactured using crochet stitches and embroidery technique by using a thread that is made from disposed of shopping and garbage bags. Some of the products that KeesChic manufactures using this thread include bean bag chairs, beach bags, scuba dive bags, sturdy yoga mats, and stress balls.

Mumm
Prize: Trip and Stay in Dubai by AstroLabs

Cairo-based Mumm was the second winner of AstroLabs’ sponsored trip to Dubai to learn and understand UAE’s ecosystem. Founded by Waleed Abd El Rahman in 2015, Mumm is a marketplace for homemade food. The startup that currently delivers in Cairo has raised more than $200,000 in funding from 500 Startups and A15.

Kiliim
Prize: Trip and Stay in Dubai by AstroLabs

Kiliim, an Egyptian social enterprise also won a trip to Dubai. The young startup is trying to revive the local craft of handmade kilim making in Egypt. They manufacture handmade kilims with modern designs in a small Egyptian village Fowwa that was once known for kilim weaving but things have changed due to ‘declining tourism industry and the fast spread of cheaper machine-made rugs.’ With their initiative, Killim hopes to put ‘Fowwa back on the local and international map for authentic craftsmanship.’

Some of the other startups that made it to the final ten included MerMaid and La Reina Exchange.