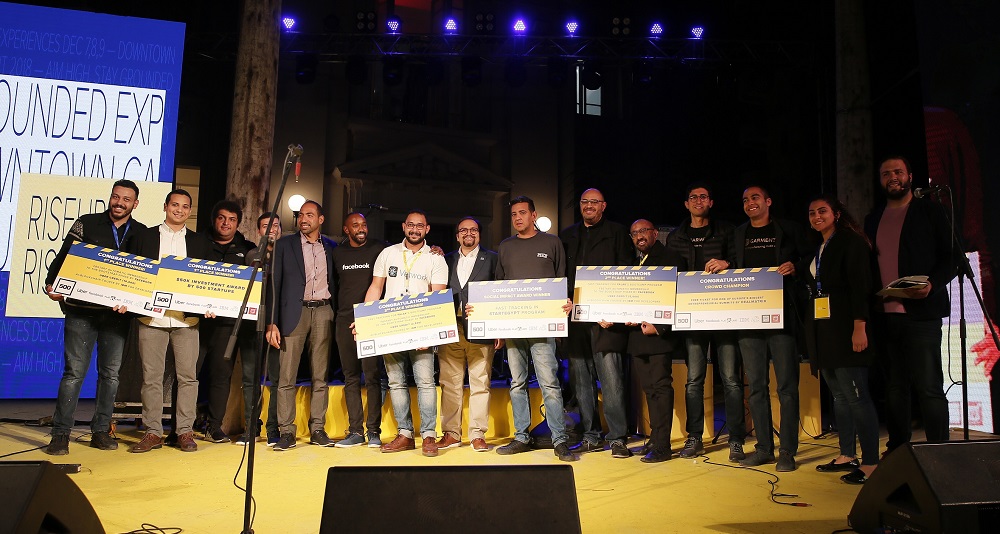 We’re very late on this but as the cliche goes, better late than ever.

RiseUp Summit concluded its sixth edition after three days of different activities in Cairo last week. The event was attended by over 6,000 people form 48 countries and featured talks and sessions by almost 300 speakers. RiseUp Summit 2018 also hosted 240 startups and close to 300 investors.

For its pitch competition, RiseUp had received over 300 application from which 50 pre-seed stage startups were shortlisted to pitch to a panel of judges from leading VC funds angel groups of the region. The judges for initial round included Endure Capital’s Waleed Khalil, Cairo Angels’ Aly El Shalakany and Zeina Mandour, BECO Capital’s Jad Antoun and Vinay Ramkumar, and Ahmed Al Jabreen from 500 Startups.

The panel of judges selected ten finalists after watching all the fifty startups pitch during the first two days of RiseUp Summit. The finalists were then given a chance to pitch at the Capital Stage in The Greek Campus in front of a panel of judges, which included, Sherif Makhlouf, a Partner at consulting firm Innovety, Hasan Haider from 500StartUps, Abdelhameed Sharara from RiseUp and Willie El Amin, Strategic Developer Programs Manager for Facebook, MENA. The pitches were also watched by hundreds of attendees.

Arngineering, a Flat6Labs graduate was selected as the winner of the RiseUp Pitch Competition, winning a $50,000 investment from 500 Startups. The investment will be made following due diligence. Argineering has created RGKit that it claims to be world’s first plug-and-play gadget that could transform displays and exhibits into interactive spaces, with an easy-to-use process.

Their tools make physical designs interact with people in what they say is the easiest way possible. RGKit can help create designs that detect passersby, lights that react to movement, objects that twirl and swirl, items that turn to touch sensors and a lot more.

Argineering’s solutions can be used in retail, exhibition, booths, live events, malls and many other places. The startup, as it says, eliminates obstacles of time, cost and the need for a high-tech engineer to do all the coding and electronics, that are normally there when designing experiences with physical interactions.

Apart from the $50,000 investment, Argineering also won EGP 10,000 (~$550) worth of credit for Uber rides, Artificial Intelligence and Blockchain course from IBM as well as membership to the bootstrap phase for the FBStart program by Facebook.

Argineering had also made it to the finals of TechCrunch Startup Battlefield MENA earlier this year.

Nawah Scientific that won $50,000 investment from 500 Startups last year went on to raise $1 million Pre-Series A last week. Let’s see if Argineering can repeat something similar next year.

MayDay’s apps could be used to request two trucks, tire change, battery jump start, and fuel. The startup that founded earlier this year has their services available in Cairo and Giza.

The startup won EGP 5,000 (~$225) in Uber credits and access to FBStart by Facbeook, and Artificial Intelligence and Blockchain course from IBM.

The third prize was won by on-demand pet medical care startup VetWork. VetWork through its mobile apps provide home visits of Vet physicians, pet insurance plans, and grooming. Acoording to their website, they also have an online shop selling pet food and more.

VetWork won EGP 2,500 (~$110) in Uber rides, access to FBStart by Facebook, and the Artificial Intelligence and Blockchain course from IBM.

Both MayDay and VetWork also won fast tracking for Falak Startup bootcamp program but at least one of them has already graduated from Falak’s accelerator program.

The crowd also had a chance to pick their favorite from ten pitches they saw and they went with Garment IO, a plug-and-play garment manufacturing management solution that combines software and hardware to help factory managers get the full picture of production processes, worker performance and production costs, all of which can be accessed online on Garment IO’s web-based platform.

The startup won a free attendance ticket to any European tech/startup event of their choice.

Takestep, a web and mobile platform (it seems that they’re not live for public yet) that connects all the stakeholders including patients, guardians, treatment facilities, and supervisors in the addiction recovery process, won the Social Impact Award. The platform connects patients with all these stakeholders on an ongoing basis to prevent them from relapsing.