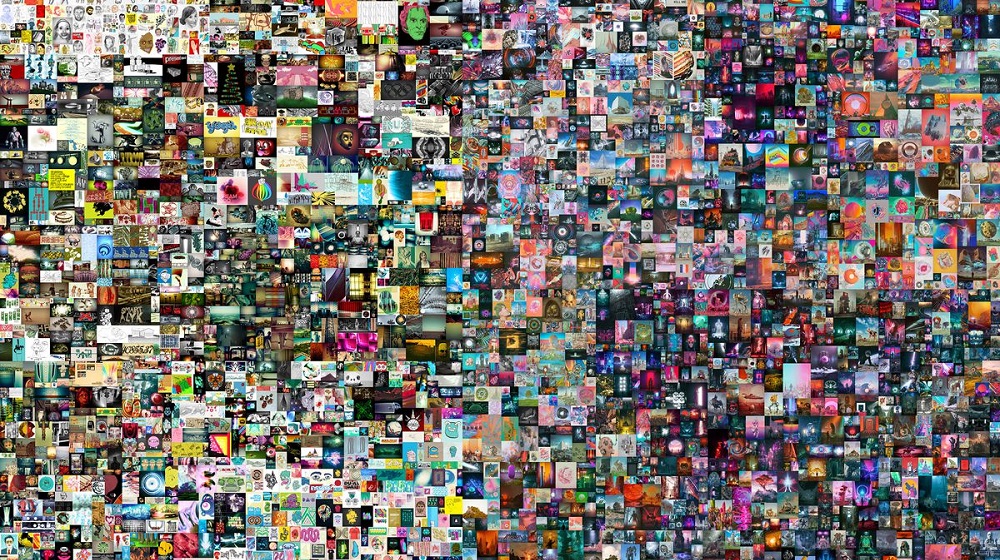 In June 2017, Matt Hall and John Watkinson released 10,000 CryptoPunks, a set of tokenized 24×24 pixel art images built on top of Ethereum. Each Punk was unique and could be officially owned by only one person.

Originally free and available for anyone to claim, the value of these tokens (or NFTs) has since exploded and the most expensive one was recently sold for $7.6Mn.

What can you do with a Punk once you’ve bought it? Nothing at all, well beyond bragging that you own one. When I suggested to my wife that we purchase one of them (the cheapest sells for $31,690 today), her response was: ‘Are you insane?’

To answer this question, let’s explore what NFTs are and discuss where this crazy trend is headed.

The rise of NFTs

Non-Fungible Tokens (NFTs) are crypto tokens that use blockchain technology to prove the authenticity and ownership of a unique digital asset.

An asset is fungible when it’s interchangeable with another identical asset. Money, for instance, is a fungible asset since you wouldn’t care which dollar you use to shop, and my dollar is equivalent to your dollar.

Similarly, most digital products (song, ebook, picture) have always been fungible as they can be easily copied multiple times, and users don’t typically care which copy they use. As a result, we need intermediaries (platforms, contracts) to claim ownership over a digital asset and transfer it to another person.

NFTs solve this issue by embedding a unique ID (metadata) into a token that represents the asset. When an NFT is minted, its ID is registered on the blockchain and becomes its passport, enabling users to see and verify its entire history (ownership, creator, price) without the need for an intermediary.

The blockchain is a digital ledger that allows the recording of transactions and enforcement of contracts through a decentralized network of computers and without the need for an intermediary. Here’s a schematic of how it works (applied to a Bitcoin transaction):

Overview of how the blockchain works

NFTs have exploded in popularity in recent months, and the numbers have been crazy:

• Beeple sold a collage of his digital art collection for $69 million through an auction organized by Christie’s, making this the third most expensive work from a living artist sold at an auction.

• SOCKS, a token that entitles owners a unique pair of limited-edition Unisocks socks originally sold for $12, now trades for $71,000.

As a result, almost everyone is jumping on this bandwagon: Mark Cuban and Gary Vaynerchuk are trading NFTs, while many celebrities (3LAU, Shawn Mendes, The Kings of Leon, and Lindsay Lohan) are minting them.

The most popular use case today is NBA Topshot, a partnership between the NBA and Dapper Labs to sell NBA highlight videos backed by NFTs (making them scarce and verified). Demand for these videos surged in recent months, with 100,000 users owning at least one highlight, the most expensive of which (this dunk by Lebron James) currently sells for $250,000.

It’s worth noting that owning an NBA TopShot highlight doesn’t give you any exclusive rights over the video, and anyone can watch it online and download it. In addition, each TopShot is released in multiple editions, with a different number attributed to each one. For instance, Lebron’s dunk was released in 50 editions; therefore, 50 people actually own the same video, but each with a different edition number, thus a unique NFT.

It might seem absurd to pay this much for a video, but collectors argue that it’s similar to owning a Monet painting: The value doesn’t reside in someone’s ability to view it but in the ownership itself. To that, critics reply that a physical painting has been touched by the artist’s brush, whereas a digital file is a series of ones and zeros organized in a certain way, that can be exactly replicated. These critics are convinced that we’re in an enormous bubble waiting to pop.

Are NFTs in a bubble?

The ‘Tulip Mania’ is the first recorded asset bubble in history when the prices of some tulips increased by 200 times. Charles Mackay describes the events in his book Extraordinary popular delusions and the Madness of Crowds:

Many individuals suddenly became rich. A golden bait hung temptingly out before the people, and, one after the other, they rushed to the tulip marts, like flies around a honey-pot. Everyone imagined that the passion for tulips would last forever and that the wealthy from every part of the world would send to Holland, and pay whatever prices were asked for them.

In Feb 1637, tulip traders could no longer find new buyers willing to pay high prices. Demand for tulips suddenly collapsed, and owners found themselves in possession of bulbs now worth a tiny fraction of the price they had originally paid.

The rise of NFTs might have initially started with collectors and fans trying to capture a piece of digital art history, however, what’s happening today bears a great resemblance to the Tulip mania:

• The recent spike in prices has attracted speculators looking to make money. They’re open to buying any NFT, regardless of their intrinsic value, as they only care about selling it at a higher price down the line. Yesterday, a single red pixel was selling at $900,000.

• Similarly, hundreds of artists flooded the space and started minting NFTs in the hope of making a quick buck. As a result, the market is being oversupplied and the uniqueness of each NFT is being diluted.

Having said that, bubbles generally last longer than people expect, and I have no idea when the NFT bubble will burst and how much my hypothetical CryptoPunk will be worth in a month. One thing is for sure, bubbles are typically a precursor for innovation, and the ability to prove ownership over digital assets has wider use cases than just art. In specific, NFTs will play a big role in unlocking the collaboration economy.

In 2019, Li Jin coined the term ‘Passion Economy’ as a new model of internet-powered entrepreneurship where individuals turn their passions (i.e playing video games or taking videos) into livelihoods by monetizing their audiences:

• Charli D’amelio, the 16-year-old TikTok star, has accumulated a net worth of $8 million dollars from the platform.

• The ten most successful creators on Teachable have collectively earned over $100Mn.

• The top 10 authors on Substack collectively make over $15 million per year.

However, a creator’s output is limited by their capacity to develop content, and the full potential of the passion economy will be unlocked when creators are able to easily collaborate with each other across platforms to build on each others’ work and compound their efforts.

I’m not saying such collaborations do not exist today. However, they’re typically mediated by third-parties (legal agreements and auditors) with a lot of friction and often lead to misaligned incentives. For example, a developer can use the code of another developer in one of two ways:

Pay a one-time fee for it, which fails to create long-term alignment of incentives given the song might be a hit or a flop and the artist would not be compensated accordingly.

Sign a revenue-sharing agreement, which requires lawyers to draft legal agreements and auditors to check that the right payments are being made.

The collaboration economy offers a better model for partnerships as creators seamlessly share and remix their creations across platforms, with no limitations, and through automatic revenue sharing mechanisms.

NFTs and the collaboration economy

NFTs enable the collaboration economy by embedding automatic royalty collection mechanisms within a creator’s work, giving them financial upside whenever their work is used and making it easier for them to build on top of each other’s work.

Developers stand to benefit from such innovation. Instead of developing open-source code and receiving no compensation, they would be able to easily leverage and improve each other’s work to build a full-fledged commercial software, with revenues automatically accruing to the original creators based on their contribution level.

Each developer would mint their code into an NFT (ERC1155-backed) and these NFTs would be grouped together to form the commercial software and minted in a compounded NFT (ERC721-backed). Whenever the software is used and generates revenue, each individual developer would automatically get their fair share of royalties, without the need to track them down.

It’s as if each developer is building a lego piece and these pieces are put together to build a structure that generates returns and distributes them equitably to these developers.

Microsponsors.io is one of the projects enabling that. The platform helps freelancers tokenize their work and allows potential employers to bid for the NFT that represents a chunk of a contractor’s time and maintains immutable records of what work can be done.

The same concept can be applied to other industries where partnerships happen, including music, research, and even content creation. For more details and a deeper perspective of the future of work, check out Power to the Person by Packy McCormick.

Of course, not every project will or should adopt this decentralized model, as some projects will be best served by more centralized operations. However, as individual creators get properly compensated for their individual work, I expect many of them to opt-out of working in large organizations and instead take freely decide what to work on and which projects to support, creating a reinforcing flywheel effect for the collaboration economy.

Unfortunately, we’re not there yet.

Unlocking the full power of NFTs requires them to be widely available, easy to share, cheap, and efficient. Today, the process is complicated, has very niche use cases, is energy-consuming, and expensive.

Most blockchains use a proof-of-work protocol to verify and confirm the validity of transactions. Once a transaction is executed, computers solve complex puzzles and race each other to validate them in return for a fee, paid in a crypto-currency.

As the value of cryptocurrencies surged in 2017, “miners” built centers around the globe to validate blockchain transactions and continuously increased their computational power to increase their chances of winning the validation race (I’m oversimplifying here). This dramatically increased electricity consumption and carbon emissions of blockchain operations. As a result, bitcoin mining today generates the equivalent of Argentina’s carbon emissions.

Beyond emissions, the fees of minting an NFT (i.e., register it on the blockchain) and trading it are high. Artists generally pay more than $100 in “gas fees” to mint an NFT, and buyers pay high transaction fees. This increases the friction of minting NFTs as creators are forced to bear the minting cost upfront, without a guarantee that the NFT will generate any value in the future. As a result, many projects, such as microsponsors.io, have been put on hold due to high Ethereum gas fees.

The landing page of Microsponsors.io

Until these issues are resolved, NFTs will have difficulty scaling. Fortunately, solutions are on the way:

An alternative to the proof-of-work protocol, called proof-of-stake, is under development. The new protocol replaces the need to solve energy-intensive puzzles to win the race with a simpler process where your chances of winning the race depend on how much stake you hold in the system (i.e., coins in your wallet) as opposed to your computational power, thus dramatically reducing electricity requirements.

Many new blockchains with much lower fees are gaining popularity and are expected to dramatically reduce the cost of minting and buying an NFT.
New platforms are simplifying the NFT trading process. For instance, transactions on NBA TopShot are not conducted in cryptocurrencies but regular dollars, making it easier for everyone to get involved.

Regardless of where we go, the future is very exciting and the decentralization movement will have a significant impact on how we interact and work together in the future!