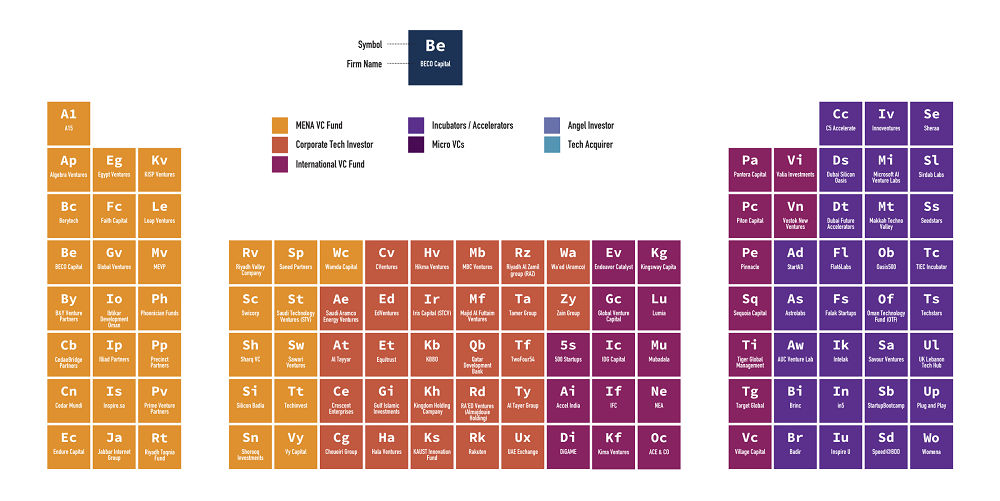 BECO Capital, one of the leading VCs of the region published its 2018 edition of the periodic table of tech investors in the Middle East & North Africa. First published in 2015, this is the fourth edition of this infographic by BECO. The table features most of the investors from the region.

In a blog post, BECO noted that it includes 148 active investors, that have made at least one investment into a tech startup in 2018, divided into 7 categories including MENA VC Funds (34), Incubators & Accelerators (29), Corporate Tech Investors (26), International VC Funds (22), Micro VCs (15), Angel Investors (13) and Tech Acquirers (9).

“In 2018 we saw a significant increase in the Micro VC, with 10 new funds added to our radar. The Micro VC category increased by 200% compared to 2017, making it the highest growth category. Micro VCs generally write smaller cheques, so we can expect to see a surge of investments in early-stage startups in the coming years,” the firm said in the blog post.

It further noted that 22 international VC funds invested in the region in 2018 which is a 120% increase from the 10 international funds that were active in the region the year before, “The top MENA startups have managed to attract global VC’s attention to the region, a trend that we only see accelerating in the near future.”

You can download the PDF of the table here. Another similar resource that you might want to have a look at is our list of VCs, Angel Groups & Accelerators in MENA.