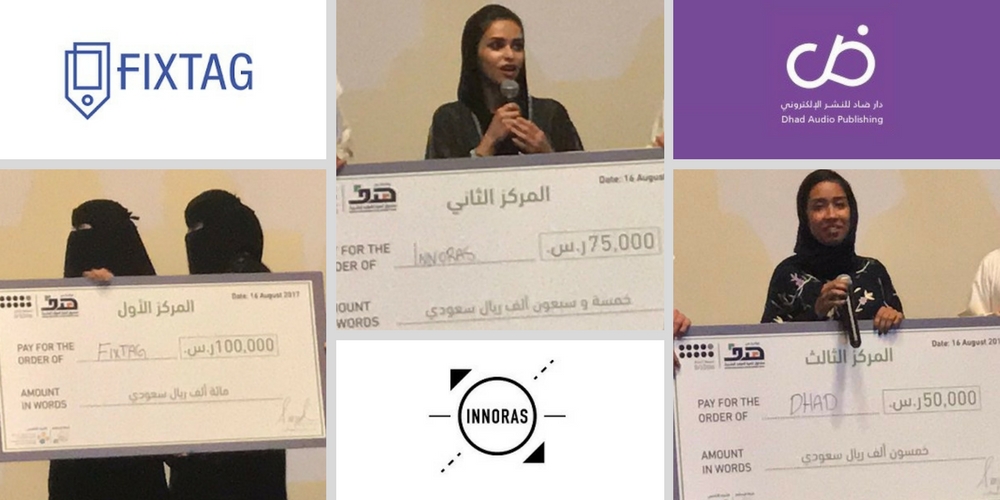 Nine Tenths (mostly referred as 9/10ths) is a Saudi government organization that support entrepreneurs through different initiatives. The organization is formed and backed by Saudi Human Resources Development Fund also known as Hadf . One of the initiatives of Nine Tenths is its Startup Accelerator that provides selected startups with SAR 75,000 ($ 20,000) in seed funding, office space mentorship and a lot more.

The accelerator organized a closing ceremony and demo day for its second cohort earlier this month. The ceremony which was held in Riyadh was attended by different government officials, businessmen, VCs and startup community.

All the startups that were selected by jury as winners are founded and led by female founders.

The first prize of SAR 100,000 ($26,665) went to FixTag, a startup co-founded by three sisters: Alanoud Alqahtani, Aljawharah Alqahtani, Madhawi Alqahtani. Launched in 2015, FixTag offers mobile repair and maintenance services to women through its repair shops and online portal. It had started with a Twitter account by Aljawharah Alqahtani in 2013 to offer mobile and laptop maintenance repair services to students at Princess Nora bint Abdul Rahman University. Aljawahrah who herself was a student at the university opened an on-campus store to offer same services and sell mobile phone accessories, an year after she started the Twitter account and eventually in 2015 she turned it into a startup that now employs 15 people. FixTag’s online portal now offers repairs and sells mobile phone accessories.

Founded by Ragad Alsharif, Innoras is a company that aims to introduce different innovative products to solve different problems for a big no. of people. The company starts from R&D to work on different ideas and eventually translates them into physical products. Their first product is a Portable Bidet called Tesh Tesh. Introduced in 2014, it’s the first trademark to be registered in this category in Saudi Arabia. Now sold through an online platform and different retailers, Tesh Tesh that primarily targets the Muslim travelers has sold thousands of pieces. Innoras won the second prize of SAR 75,000  ($20,000) at the closing ceremony of Nine Tenth’s second cohort.

Speaking to MEANbytes about her experience with Nine Tenths, Innoras’ Founder Ragad AlSharif said: “The experience was amazing, and it changed the way I look at business and my thoughts about managing a start-up, Accelerator’s team was very experienced to guide us on how to build a business.”

Launched in 2014, Dhad is a platform that sells Arabic Audiobooks online. Founded by Manar Saud Alomayri, Dhad sells audiobooks in the categories of literature, poetry, kids and teenagers, science & Islamic fiction, philosophy and novels for SAR 6-22 SR ($1.6-5.9) each, with some of them available for free on their website and iOS application. Manar who is a Computer Science graduate started Dhad after leaving her corporate job as she felt that there is a gap in terms of availability of Arabic audiobooks in the market that can be filled. The startup apart from selling through its platform and website now also has partnerships with some local bookstores to sell its audiobooks. Dhad was selected as winner for the third prize of SAR 50,000 ($13,330).

The last prize at the ceremony was for a People’e Choice winner that went to Magadeer which delivers fresh ingredients with recipes at your doorstep to help you cook fresh food. Sounds like a very interesting idea and clearly would’ve won our vote as well. Magadeer’s team went home with the prize of SAR 75,000 ($20,000).

The other notable startups that graduated from this cohort include Cura, Ajeer, Mujiz, Serviis & Quick Drop Laundry.