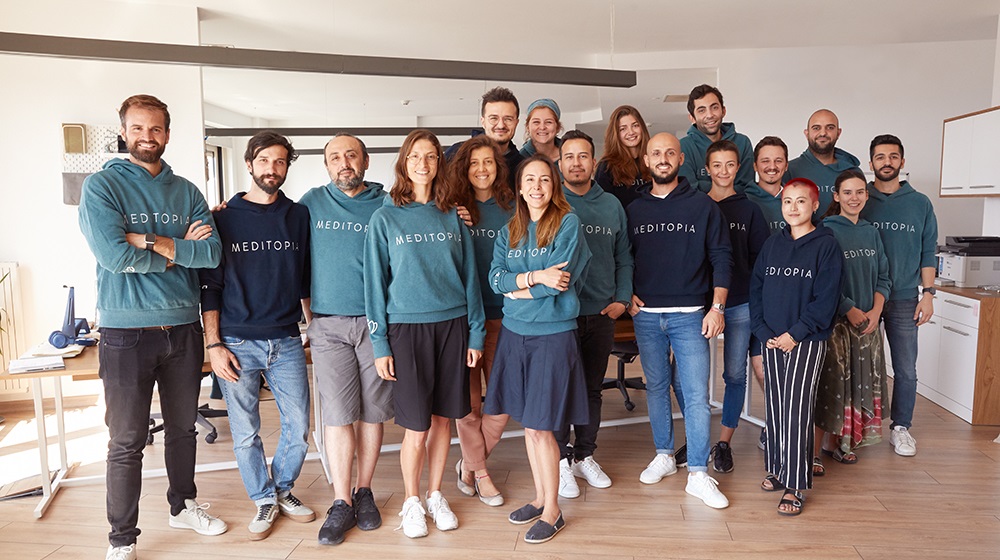 Meditopia, a Turkish-German startup that offers personalized mindfulness services to people across the world, has raised $15 million in a Series A co-led by European early-stage VC Creandum which was an early backer of Spotify, and Highland Europe, a Geneva-headquartered European growth investor.

Founded in 2015 by Berk Yilmaz, Fatih Celebi, & Ali Murat in Turkey, the startup that now has dual headquarters in Istanbul and Berlin has built a mental coach platform that offers guided meditations to users in 75 markets. The meditations are available in the form of programs spread across different (pre-recorded) sessions and quick two-twelve minute standalone sessions.

Some of the content on Meditopia’s platform (that is available as an Android and iOS app) is available for free while for the rest, the users have to buy a subscription that costs about $50 per year. The platform also offers users a one-week free trial of its premium subscription.

It claims to have coached over 14 million members since its launch in 2017. For cotext, Calm, the leading player in the mental health space for English speaking audience that became a unicorn last year after raising $88 million Series B until last year had 40 million downloads of its iOS and Android apps worldwide and 1 million paying subscribers. Calm’s subscription is priced at $69.99.

Meditopia says that it is the most widely used and downloaded mental coach in non-English speaking markets. It has not shared details about its paying subscribers but said that its sales have grown 10x year-over-year.

The startup works with trained professionals including therapists, psychologists, meditation experts, and writers, in each one of its 75 markets to create meditation plans that are tailored to specific needs of their culture, language, or country. Its app features almost 3,000 pieces of content in 10 languages (including English) which it says is the largest collection of mindfulness and mental wellness programs offered by any platform in the world.

“Until now, most meditation and mental health apps were built and written to largely suit the needs of English-speaking, Western groups, making them less useful for other demographics from different cultures and countries,” said the startup in a statement.  “Meditopia believes that cultural differences in the way topics like sexuality are perceived around the world, mean that mental wellness services should provide resources or approaches that are designed for that culture.”

Meditopia’s co-Founder Berk Yilmaz in a statement, said, “Our mental wellbeing is deeply rooted in our culture and the events happening around us, the way we speak, people we interact with, the community we live in, politics and so on. These are the main factors that affect our peace. Therefore mental wellness needs to be handled locally, personalized to our local needs and culture.”

Co-founder Fatih Celebi explained that they don’t think that there is a one-size-fits-all solution to mental health, “With Meditopia we’re helping to provide for the long-term deeply personal, complex needs of people across the globe.”

Co-Founder Ali Murat argued that mental wellness is something everyone should be able to achieve regardless of their country of origin, native language, socio-economic status, ethnicity, or religion, “We first focused our efforts on our home country Turkey before expanding worldwide so whether you are Latino, Japanese, Russian, North American, or Arab, you can find support and coaching in our global community.”

Carl Fritjofsson, Partner at Creandum, said, “We’ve followed Meditopia for the past two years and have been incredibly impressed by how they’ve been able to capture this opportunity across the world, all while being one of the most capital-efficient run companies around.”

Fergal Mullen, Founding Partner at Highland Europe, said, “For too long, the technology available [in the mental health space] was created for English-speaking groups alone. Meditopia provides the alternative; a solution that helps its members get to the heart of what they need in a way that suits them. We’re thrilled to be a part of getting this vital service to those people.”

Both Carl Fritjofsson and Fergal Mullen are joining the board of the startup as a result of investment.