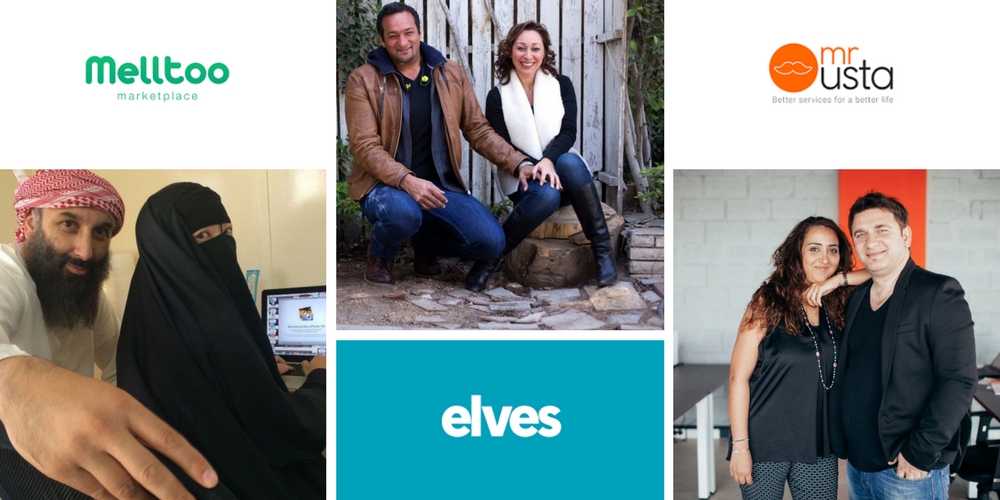 Finding a Co-Founder for your startup is one of the most difficult things to do after you come up with an idea. its not as simple as some may think of it. Apart from being behaviorally compatible to each other, the co-founders must complement each others’ skillset. Seth Sternberg, Founder & CEO of Honor, a startup that provides personalize home care,  once said:

“Co-founding a startup is like getting into a marriage – picking the right people is critical.”

Even though  MENA’s ecosystem is still very young, we already have some successful startups to share, that were co-founded by married couples.

Co-founded by Sharene Lee & Morad Irsane in 2013 and launched in 2014, Melltoo is a marketplace for buying and selling second-hand things. No, it’s not another OLX or Dubizzle. Its much more than them. Trying to solve all the pain-points of buying and selling second hand things, Melltoo through its platform and mobile applications let people buy and sell these things without having to leave their homes. They take care of payment and delivery. According to the data available on Crunchbase, they’ve raised $1.21 million in two investment rounds until now.

Sharene has shared her thoughts about what it means for a startup to have married co-founders in an article she wrote for Entrepreneur Middle East. She thinks that married co-founders share equal commitment towards the startup and neither of them can think of working against the other.

“Too often, startups fail before they even start because co-founders are not equally committed, or trust is broken. With married co-founders, there is much more at stake than the health of a business. Firstly, married often means that you’re done with college and have other financial commitments. Secondly, working against your co-founder is equivalent to working against yourself, not to mention an attempt at marital suicide.”

She explains how important is its for the founders to have complimentary skillsets and well-defined roles to ensure that both the founders are adding value.

“Morrad is the ideas guy, the visionary, the one who motivates and inspires. I’m the one knee-deep in the logistics, turning ideas into actionable plans. At the idea stage, Morrad knew he wanted Melltoo to be a platform for buying and selling with an Instagram-like interface with WhatsApp integration. I wrote up the comprehensive feature-set, created wire-frames and screen flows, and made sure the end product matched the initial idea.”

Sharene also explains how even their normal conversations are also about work.

“Other married couples talk about baby’s first steps or their 10 year-old’s great test score. My husband and I talk about user privacy on Melltoo, and our kids are chanting lines from our video explainer! We have to enforce “No Melltoo” hours and zones in the house.”

Co-founded by Karim Elsahy & Abeer Elsisi, Cairo-based Elves pairs you up with a real person to offer help with finding, booking, buying, and delivering things for you, anywhere in the world through Facebook Messenger or their iOS App. The assistants recommend tailored stuff according to your need after doing the search – yeah, no pre-defined BS. If you like the recommendation, you get to buy it at the spot without signing up anywhere. Founded in 2016, the startup already has 40 or more employees and has raised $700,000 in funding.

In a conversation with Inc. Arabia, Abeer shared how easy it is for both of them to understand and offer help when the other is spending extra hours at office to meet a deadline.

“We try not to bring our work home with us, but we somehow always do. It’s hard because launching a business has its ups and downs, and it is a daily struggle. We both give it 100% and hope that it works out. We understand when the other is working towards a deadline. If I have to spend more time at the office, I never have to explain myself. Karim is more than happy to help out with the children.”

“The way we balance each other out in our job translates into how happy our users are with us.” Karim also shared his thoughts in the same conversation. “It’s funny, Abeer and I have co-founded three startups so far, and at the same time had two kids; the latter is the harder part!”

Co-founded by Ibrahim Colak & Dunia Othman in 2013, mrUsta is an online marketplace that connects customers to different maintenance providers including carpenters, plumbers, painters, cleaners in UAE & Saudi. Launched in 2014, the startup has raised more than $1 million in funding with latest investment of $750,000 in November last year. Their marketplace in UAE until last year had more than 10,000 customers and 6,000 providers in 300 different categories.

Dunia who serves as COO of the company in a conversation with Inc. Arabia, raised a very important problem that is probably faced by married co-founders only.

“The problem arises when we have to take time off together. This means that we are both away from the business at the same time, which is why we get a break very rarely.”

Karim in the same conversation talked about how their relationship as a couple transformed during different stages of the startup.

“We conceptualized mrUsta when we were dating, got married while we were launching the business, and I got pregnant while we were raising funds. It’s really been a rollercoaster.”