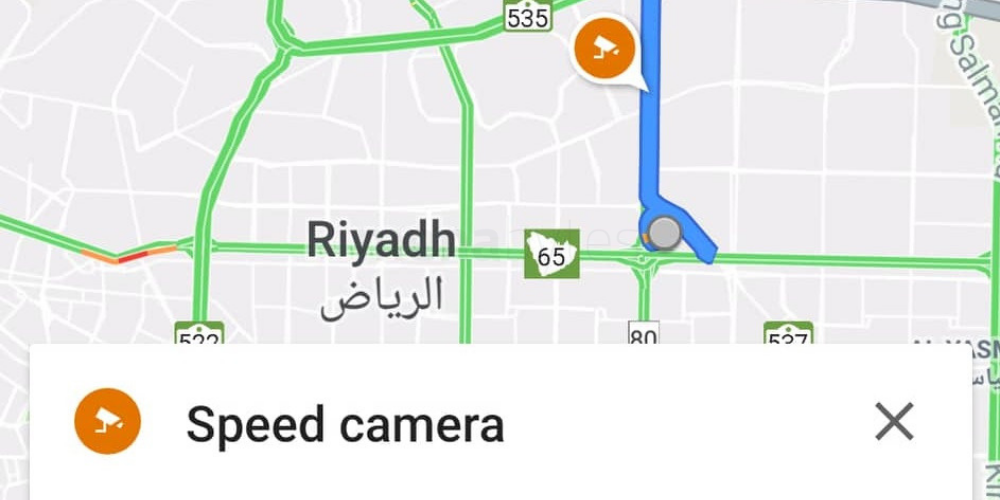 Google Maps now shows speed limits and alerts users when they’re approaching speed cameras (including mobile speed cameras) in over 40 countries including many from MENA. The feature that was launched in select markets less than six months ago is now available in Saudi Arabia, Kuwait, Qatar, Oman, Jordan, Morocco, Tunisia, and over 30 other countries.

The news had first surfaced on Reddit without the details of where exactly it is available right now but Google later confirmed the list of the countries to TechCrunch. It is not clear if the feature is available for all the Google Maps users in these markets or is being rolled out in batches.

We can confirm that we’ve seen speed camera alerts in action in Riyadh, Saudi. Google Maps, last week, had warned us through its voice navigation when we were approaching a speed camera in Riyadh. The cameras also show up on the road in navigation as icons, as shown in the screenshot below. The speed limits appear at the bottom of screen in navigation.

It’s unclear how much of data Google Maps already has on both the speed cameras and speed limits in the region but given the fact that it’s trying to crowdsource these data points, it will be able to cover all the speed traps very soon.

The feature has been a part of Waze, a social mobile navigation app that Google had acquired in 2013, for years.

According to TechCrunch, the feature that is being made available on both Android and iOS will allow Android users to report mobile speed and stationary cameras in addition to being able to see/receive those updates while they’re driving. iOS users (for now) can only receive updates and not report the cameras.