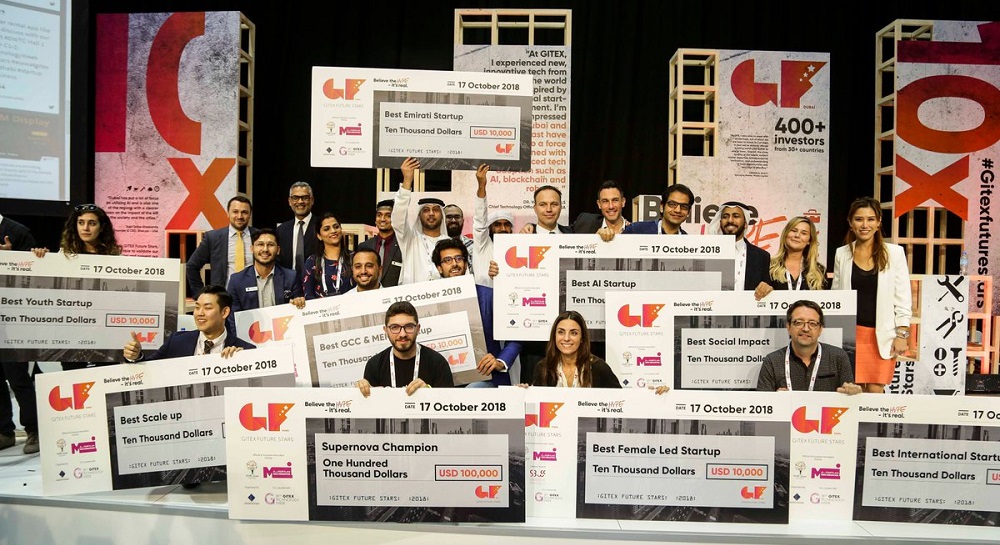 GITEX, Gulf Information Technology Exhibition, the annual consumer computer and electronics trade show, exhibition, and conference, that is perhaps largest event of its kind in the Middle East & North Africa, concluded last week in Dubai. Gitex Future Stars, the startup event that’s part of GITEX and takes place at the same venue, Dubai World Trade Center, also ended at the same time. Tens of startups from the region (and beyond) exhibited their products at the event and took part the competition, dubbed as Supernova Challenge.

Grand finale of this competition, Gitex Future Stars Supernova Challenge took place on Wednesday, last week, with 24 shortlisted startups pitching in front of a jury made up of local and international judges.

Nine startups were selected from the 24 pitches as winner – with one champion and eight category winners.

Beirut-based Spike won the grand prize of $100,000 after being declared the Supernova Champion. Founded by Ziad Alame, Spike through mobile apps for iOS and Android allows people to better mange their diabetes. The application monitors patient’s behavior on daily basis and reminds them with different things including taking insulin, meals, and general activity. The application also stores patient’s data that can be shared with doctors and/or caregivers. Spike seems to have made winning a habit. The startup has previously won different competitions including $50,000 worth of investment at the demo day of Speed Lebanon’s acceleration program, second place in the ideas track of MITEF Arab Startup Competition 2018, Harvard Arab World Conference Startup Pitch Competition 2018, and Popup Pitch Startup Competition. They probably have enough in the bank for the next

Dubai-based AURA Lab won the Best GCC/MENA Startup category with a cash prize of $10,000. Founded by Aboudy El Farkh and Bachir Noufaily, the startup has built a perfume retail technology platform that uses machine learning to help retailers improve the in-store experience (and marketing) and help consumers find a signature fragrance. It’s Scentech Algorithm recommend and learns about the relationships between words and scents based on customer language and preferences.

Khayati, a Dubai-based app that allows people to find tailors in their area through its mobile apps, won the Best Emirati Startup award. The startup went home with the prize money of $10,000.

Oliv, another Dubai-based startup came out as Best Youth Startup, winning $10,000 cash prize. Founded by Jean-Michel Gauthier, Oliv (previously known as InternsME) is a career platform that helps youth in the region launch their careers by connecting them with employers for internships, part-time and graduate jobs.

Virginia-based MAJ Solutions was declared the winner of Best Female-Led Startup category, winning $10,000 as cash prize. According to their LinkedIn, they are a boutique digital consulting agency that uses open-source technologies to provide web software services, designed to reduce carbon and digital footprints. The services listed on their website include web design and development, branding, digital marketing, and graphic design.

Korea’s ONESOFTDIGM, that is creator of Fitrus, a pocket-sized fitness tracker that measures and analyzes user’s body composition won the Best Scale Up category with a cash prize of $10,000. The tracker sends the information to Fitrus’ mobile app, which can be used to see a graph for each component of user’s body composition, helping them learn about their progress over time.

Saudi startup Labayh won the Best Social Impact Startup award, with a cash prize of $10,000. The Madinah-based startup, founded by Bassem Al Baladi, connects users with licensed psychologist and psychiatrists through its mobile app, to offer consultations related to different problems that affect their mental health. The users have an option to book consultation sessions in form of chat or voice calls. Labayh was among the runners-up at Seedstars Saudi last month and had won the second place at ArabNet Riyadh last year. any focuses on environmental and business applications.

London-based Satellite Vu won the Best International Startup award with $10,000 in cash. Founded in 2016 by Anthony Baker, Satellite Vu, according to its Twitter is a satellite earth observation company focused on environmental and business applications. Its website says that the company aims to use science and technology to monitor plastic, pollution and pirates from the space.