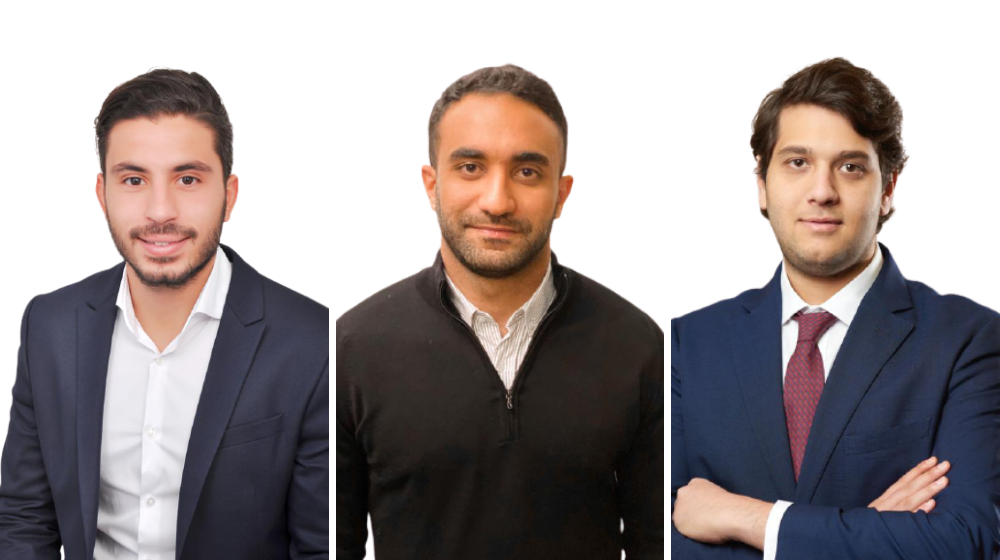 Egypt’s startup ecosystem has grown multiple folds in the last few years both in the number of deals and the total value of investments raised by startups. Fawry has become the first billion-dollar tech company of the country (just a year after its debut on the local stock exchanges and there have been outliers like Swvl and Vezeeta that have gone on to become the leading players in their categories across the region with a presence in different countries.

With the growing number of startups and investible opportunities, the number of tech investors investing in Egyptian startups also continues to grow. We’ve been seeing many new players trying to fill gaps in funding at different stages. Foundation Ventures is the latest name on Egypt’s VC ecosystem map.

Founded by three young Egyptians; Mazen Nadim, Omar Barakat, and Ziyad Hamdy, who were previously investment bankers, the early-stage VC fund that’s focused on Egyptian startups, has been operating quietly for over a year. Earlier this week, it has told MENAbytes that it has closed its debut fund. The firm did not disclose the size of the fund but has told us that it was oversubscribed.

Who’s in the team

All three general partners of Foundation Ventures have a background in finance. Mazen Nadim and Ziyad Hamdy started their careers with a leading Egyptian financial services company EFG-Hermes working on the sell-side of investment banking were with EFG-Hemes Investment Banking. They later started a private equity firm focused on import substitution and opportunistic investments, and in 2019 partnered with Omar Barakat to launch Foundation Ventures.

Omar was previously working at a Cairo-based private equity firm BPE Partners as an associate. During his time there, he covered different sectors including real estate, oil and gas, renewable energy, and non-banking financial services.

All three of them have previously invested in technology startups as angel investors before starting Foundation Ventures.

The firm also includes HOF Capital and BPE Partners as its general partners.

Foundation Ventures invests in pre-seed to Series A startups in Egypt. Mazen Nadim in a conversation with MENAbytes said that they have an average cheque size of $300,000 with the possibility of following-on in future rounds of their portfolio companies.

He also said that the fund is sector agnostic, “The ecosystem in the region is still not at a place where any fund can be dedicated to a single sector in our view. We are sector agnostic and we map out markets and themes and try to identify high potential opportunities. And while we try to monitor these trends and shifts in consumer and market behavior we believe more in founder-led insights. Learningfrom entrepreneurs about their solutions to particular problems is what excites us the most.”

Mazen added that at pre-seed stage, they like to back high-caliber founders who possess quality insights about a particular market, “We’re willing to back them before they go to the market or gain any traction.”

Foundation Ventures likes to lead the rounds but also doesn’t mind taking part in an already structured deal, “We believe that the best way for the ecosystem to mature and grow is through a collaborative approach, and this is why we love club deals and working closely with other local and regional investors.”

What do they look for in startups

Ziyad Hamdy told MENAbytes that they look for strong and capable teams that are dedicated full time to the venture, “We’re on the look for full-time founders who are articulate in discussing the company and their vision for it, have built strong technical teams (complemented by an operationally competent CEO), and have a solid understanding of their target market.”

He also explained that they like to back founders who want to focus on building enduring companies instead of looking for an exit.

“We try to look for startups that are solving a challenging high-value problem, can offer a big improvement over incumbent solutions and build long-term defensibility,” added Ziyad.

At seed-stage, Foundation looks for measurable traction, user engagement, and evidence of market acceptance. It expects the startups to have identifiable target customer and monetization strategy, scalable, and capital efficient business with favorable unit economics.

What’s different about them

As the number of investors looking to deploy money in startups across the region has been increasing, the founders are starting to have the luxury of choosing their investors in many cases. What it means for investors (both angels and institutions) is that they have to ensure that they bring more than just money to the table.

Foundation Ventures dubs itself as a firm that’s highly focused on value-add, “Our fund construction strategy is built around the idea of playing a supporting role to the startups and de-risking through adding value. FV has a very wide network of enterprise partners that our portfolio companies can tap into, allowing them to unlock immediate growth and access wide distribution channels,” said Omar Barakat.

He also stated that through the network of Foundation Ventures extends through their LP’s ownership stakes in a broad range of industries and geographies, “These companies serve as potential clients and potential strategic investors for our portfolio companies. This large network can help our portfolio companies expand their geographical and market reach, product offering, and in business development activities.”

“We like to remain highly engaged with the teams we back. Once invested we ensure that we dedicate enough time and resources supporting the founders, we basically become employees in the companies we invest in and try to help the team we invest in in
any way we can,” added Omar.

Foundation Ventures has already made four investments – only one of which has been announced publicly. It led or co-led all the four rounds it invested in. The investments include:

Capiter: A B2B ecommerce marketplace co-founded and led by Swvl’s co-founder and former COO Mahmoud Nouh. The startup had started with a lending product, offering cash flow solutions to small retailers but has recently expanded its offering to launch a B2B marketplace as well for grocery stores in Egypt. Foundation Ventures led Capiter’s recently closed investment round.

NowPay: A financial wellness platform that enables employers to offer salary advances to their employees without any burden on their cash flow. It recently closed $2.1 million in a seed round co-led by Foundation Ventures.

Minly: It is an online platform that’s building the Cameo for the Middle East & North Africa, enabling fans to buy shoutouts from their favorite celebrities.

The fund has also invested in a logistics startup that has been operating in stealth mode.