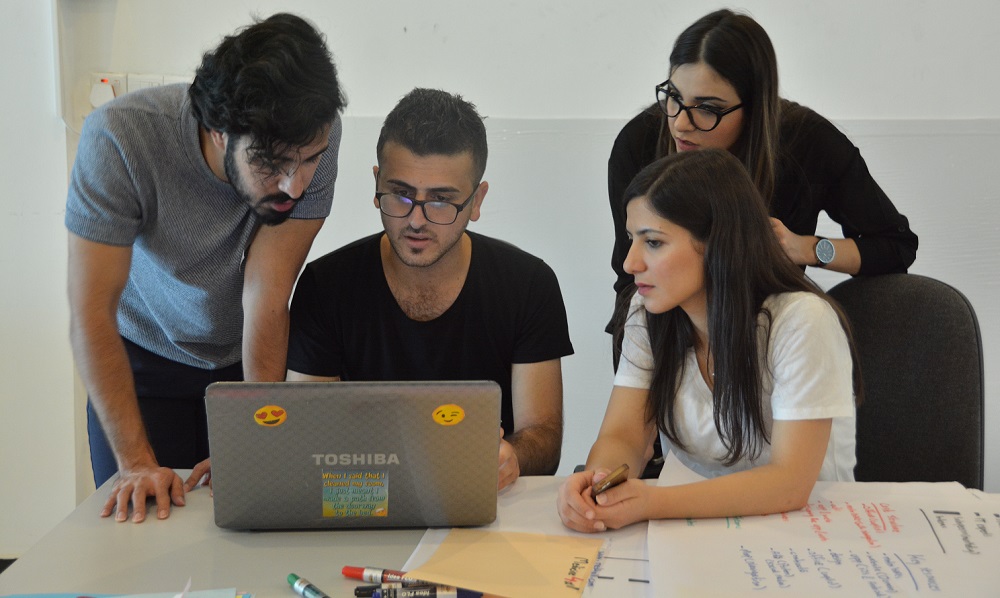 United Nations High Commissioner for Refugees (UNHCR) that is normally known as The UN Refugee Agency had published a report (PDF) titled Global Trends earlier this year that highlighted details and numbers for Forced Displacement all around the world in 2016. According to this report, there were 65.6 million forcibly displaced people in the world by the end of last year. The report noted that there were 20 new people getting displaced during every minute of 2016. According to United Nations, the average length of a displacement is now 17 years.

Now most of us think of refugees as a burden who are stuck in unfortunate situations and have no option but to rely on aid offered by governments or international agencies. However Five One Labs, an Iraq-based startup incubator wants to see them as agents of change.

Co-founded by Alice Bosley, Patricia Letayf and Sophia Burton earlier this year, Five One Labs is located in Erbil, the capital of Kurdistan Region in Northern Iraq. The three had started their research on the idea last year and registered as an organization in March this year. With Five One Labs, they aim to help refugees and conflict-affected entrepreneurs launch and grow their startups in the Middle East.

The incubator is focused on the whole Middle East but has setup its base in Kurdistan as the region has a more favorable policy towards refugee economic integration than other places in the Middle East, Alice told us.

“Syrians are legally allowed to register businesses whereas in many other countries they do not have the legal right to work or start businesses.”

Alice serves as Executive Director of the incubator, she was previously working with UNHCR’s Innovation Unit, using design thinking to solve humanitarian challenges worldwide. She has also worked at the American University of Iraq in Sulaimani, a city in Northern Iraq. Patricia, the co-founder & Director of Operations of Five One Labs has also worked in the region, her last assignment before starting the incubator was with a Dubai-based consultancy where she worked as a Political Risk Analyst.

“Having spent a significant amount of time working, living in and studying the Middle East, we were well aware of the significant talent and potential of the region’s population – which was not always being cultivated when individuals were being displaced. We were inspired to start Five One Labs as a way to supports refugees and conflict-affected communities in their efforts to create more sustainable, empowered livelihoods and to help provide them the skills and support necessary to do so.” Alice told MENAbytes.

Since starting in March earlier this year, Five One Labs has organized different events and programs to interact with the community and learn more about them before they opened applications for their three-month incubation program for startups last month. The incubator ran a six-week pilot program with 14 entrepreneurs in Erbil and Sulaimani. They also organized the Summer Startup Festival that had different workshops, bootcamps, and panel discussions and helped them interact with 300 aspiring entrepreneurs in the two cities.

The first cohort of the incubator has started last week and will run through early February next year. Selected startups and entrepreneurs will go through intensive training and receive advice from mentors in the Middle East and the US. The program is designed to help them turn their ideas into fully functional startups. Over three months, the entrepreneurs will get help understanding their customers, defining their value proposition, building their business and financial models, and improving their prototypes. Five One Labs aims to help the entrepreneurs get their first customers or first investors by the end of the program, ideally both. The incubator will also award atleast three startups grant funding at the end of the program.

The mentors associated with Five One Labs are entrepreneurs and leaders in their fields, many of whom have had experience in the Middle East. Some of them interact with the Five One community through Skype and some visit the space to deliver sessions and share advice with the entrepreneurs there. The incubators welcome entrepreneurs from the region to share their stories with the community or join the community as a mentor, either one-on-one for a specific entrepreneur, or as an “on-call” mentor who has specific technical or sectoral expertise.

Building a startup community from scratch is a difficult thing to do even if you’re trying to do it in a city that offers great infrastructure and support. Now imagine doing it in a region that had long been exposed to war. Not easy. But according to Patricia, the co-founder & Director of Operations of Five One Labs, their biggest challenge until now has been people having the misconception about refugees that they’re a burden.

“Misconceptions about refugees and their skills and background have proven to be a challenge, as some people we have spoken with see refugees as burdens or beneficiaries of aid. The entrepreneurs we work with are talented, innovative, motivated. They have great ideas that they want to turn into successful, scalable businesses so that they can rebuild their lives with dignity and contribute to the economic development and growth of their communities.” she told us.

But in spite of all the challenges, Five One Labs has had its fair share of success as they’ve been able to reach more than 300 entrepreneurs and startups from Kurdistan, Syria, and Iraq which is the biggest source of motivation for their team. From meeting young women who want to upcycle wooden pallets into beautiful furniture and young men who were passionate about using virtual reality to help refugees learn local languages, Five One’s team has met and connected with some amazing minds. The incubator has also successfully raised about $30,000 in a crowdfunding campaign last month.

That’s not enough though. They strive to achieve so much more. The incubator wants to develop the startup ecosystem in Iraq and beyond, that fosters inclusive communities of refugees and locals.

It’s not an easy job but the team behind Five One Labs is determined to empower refugees to rebuild their lives with dignity.