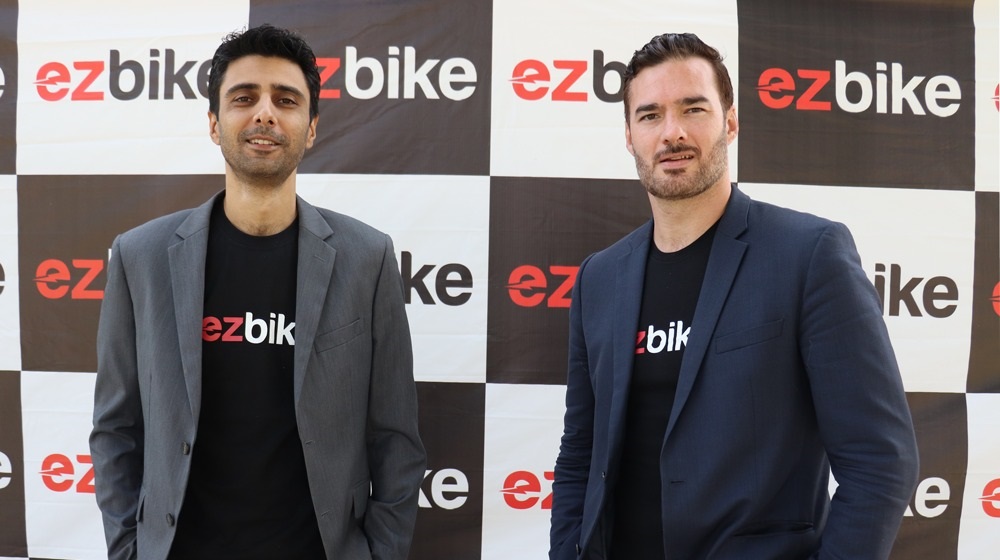 Roamer, a Pakistani transportation startup has launched country’s first self-drive electric bike rental service ‘EzBike’, it announced last week at an event in Islamabad. The service has been launched in select-areas of Islamabad for now and will gradually be rolled out across the country, said the startup without sharing a timeline of when it plans to launch it in other cities of the country.

EzBike enables users to locate a bike in their vicinity through its app and book it. When booked, the user can walk to the bike, unlock it using a QR code on the app, and start their ride. They’re charged PKR 5 for unlocking the bike and PKR 5 for every minute on the ride. The users also have the option to pause the ride, in case they need to run an errand, for example, while paying the reduced fare of PKR 2 per minute.  Once the user has reached their destination, they can park the bike at a suitable and end the ride. The bikes can only be used for travel within the coverage area of EzBike which is clearly highlighted in the app.

Mohammad Hadi, the co-founder and CEO of Roamer, the startup behind EzBike, in a conversation with MENAbytes said that the maximum distance between any two points in the area that they’re covering right now will be 10 KMs, “We expect our average rides to be within the range of 5 to 6 KM.”

The electric bikes that EzBike is starting with have a maximum speed of 35 KM per hour and can be ridden by a single person.

The electric bikes being used by EzBike

To be able to book a ride, the user is supposed to have their ID card verified (by EzBike’s team) by adding a picture during the registration process or afterward. They also need to have money in their EzBike wallet that can be added using Easypaisa (a local payment option). All the new users are welcomed with PKR 50 of free credit when they sign up.

The startup did not share details about how many bikes it has on the roads of Islamabad right now but said it plans to deploy over 2,000 electric bikes across the country within the next year.

Mohammad Hadi in his conversation with MENAbytes said that rolling out electric bikes using a shared economy model is one of the best ways you can promote electric vehicles in Pakistan, “What we are doing is trying to introduce an environment-friendly mode of transportation at scale.”

He also said that self-drive bike rentals is a much more sustainable and efficient business model than other forms of ride-hailing/sharing, “It is the cost of supply which is the biggest expense for ride-hailing companies. By deploying bikes that can be driven by the riders themselves, we’re eliminating that. It is a business with much better unit economics.”

Speaking about how they would ensure the safety of the bikes, Mohammad explained that they’ve different mechanisms in place including a private security services company that they’ve hired to deal with any unwanted incident.

“With EzBike, we want to promote bikesharing as a safe transportation option for women in Pakistan. We’ve designed our service keeping women in mind and we seem them as one group of our primary users,” said Mohammad Hadi.

In a statement, he also added that only 10 percent of the Pakistani population own a vehicle, “Mobility is still a largely unsolved problem. With EzBike, we are providing access to shared vehicles to every individual in Pakistan. This is the next wave of disruption in mobility. It will be the most cost-effective, convenient, and environmentally-friendly mode of transportation in Pakistan. And in a Covid impacted world, self-drive provides a safe way for people to move around Islamabad while maintaining social distancing.”

EzBike’s app is available in English and Urdu with Urdu as the default language which suggests that they’re going after the masses.

Roamer has previously built and launched a transportation product that offers hourly chauffer-driven car rentals. With the new service, it is expanding into micro-mobility space which is a much riskier proposition as a business (esp. considering that it is self-drive electric bike rentals) and would require a large amount of capital to scale across the country.

Hadi is confident about the prospects of EzBike and believes that the service will be operational in different parts of the country before the end of next year.