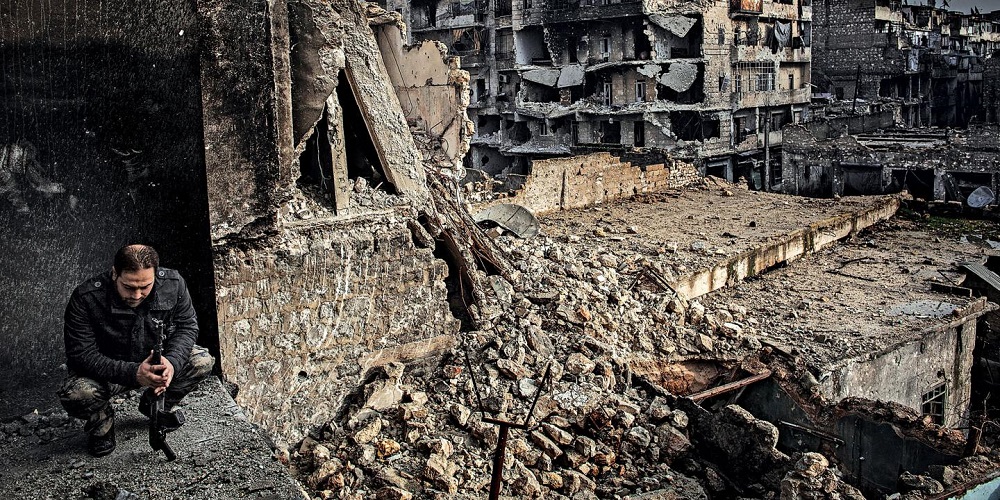 More than 150 startups were created in Syria last year—from BitCode, a platform to teach youth how to code in Arabic, to Clerk, an AI system for improving the recruitment process. The conflict in Syria has affected the population in many ways, but it has not stopped entrepreneurs from solving the problems they encounter in their daily lives every day.

In various studies, experts have shed light on the importance of empowering entrepreneurs and creating employment in the conflict zones —even while conflicts are still ongoing— to improve the level of security in post-conflict countries.

Startups like the ones mentioned above have the potential to create much-needed jobs in regions where few jobs exist. They can further help as mechanisms for finding innovative solutions for critical problems in the region.

Over the past five years, I have investigated entrepreneurship during the period of armed conflict in Syria. I spoke to hundreds of entrepreneurs and uncovered some incredible insights. The results indicate that the conflict in Syria had inspired a new wave of innovative youth to tap into unexplored fields that generate new ideas and embracing new business models; 17.6 percent of Syrian youth tried to work on startup ideas in 2014, and the figure climbed to 31.2 percent in 2015.

However, when planning and implementing economic development programs, understanding the political context and what people have been through during the conflict is significantly important. Without examining the proposed program beforehand, we risk harming communities instead of helping them. Startups in conflict zones tend to be highly affected by the conflicts. Many of the startups that I spoke to in Syria had clearly experienced the effects of the insecurity and political instability. For many, it had a huge impact on their business.

The psychological and social distress the affected the Syrian entrepreneurs due to the political volatility is undeniable. Many of them have lost someone and have not seen or heard from their families or friends for an extended period of time. Therefore, frustration has increasingly become the norm among Syrian youth. In fact, according to the Syrian Centre for Policy Research (SCPR), 11.5 percent of the Syrian population had been killed or injured due to the armed conflict by the end of 2015.

After understanding the situation and the roots of the conflict, the need for restructuring the economies in such zones is clear. An approach that incorporates an increasing role of the private sector in protecting the interests of the public while preserving economic growth. This approach can promote peace in conflict-torn economies by addressing urgent needs and grievances, reducing tension and the causes of conflict, and creating post-conflict employment that may otherwise be lacking in these regions.

One potential area of concern is where businesses primarily support one side of the conflict and leave out the other, offering job access to some people but not to others. This situation reinforces people’s frustration and marginalization and produces income inequality among individuals of different ethnic groups, thus creating the conditions for internal conflicts and civil wars.

Employment promotion programs in conflict-affected areas must work hard to be inclusive, especially toward underrepresented minorities, and actively promote transparency and accountability to ensure all relevant beneficiaries have been consulted.

This can mitigate many of the issues outlined above. In addition, programs must focus on implementing a positive impact and inflicting no-harm approach to employment promotion and invest in scaling the existing solutions that appear to be working. Based on my research, these steps can be as simple as taking a livelihood-focused approach, that aims at helping grassroots community development and focuses on supporting vulnerable groups.

Crises have long term effects that impact all aspects of life. Because reconstruction takes time to plan and execute, technology and innovation will play a vital role. The public sector has been weakened by years of destruction and cannot be expected to deliver instant results. However, with the right support, entrepreneurs can deliver instant results.

Entrepreneurship, when efficiently deployed, can be dynamic for growth and long-term renovation. It has the potential to boost economic recovery while improving access to basic services.

There will be huge economic gains in allowing entrepreneurs to express themselves and their capabilities. Entrepreneurship and the creation of meaningful employment for all sectors and members of society can help sustain peace after years of violence, war, and bloodshed. Every country that is affected by war should avoid mistakes done in the past and lead the way to recovery.

The article was first published at Author’s personal blog and has been reproduced here with his permission.

BECO Capital to invest up to $150,000 to help founders build and launch startups in the Middle East74 Total Shares