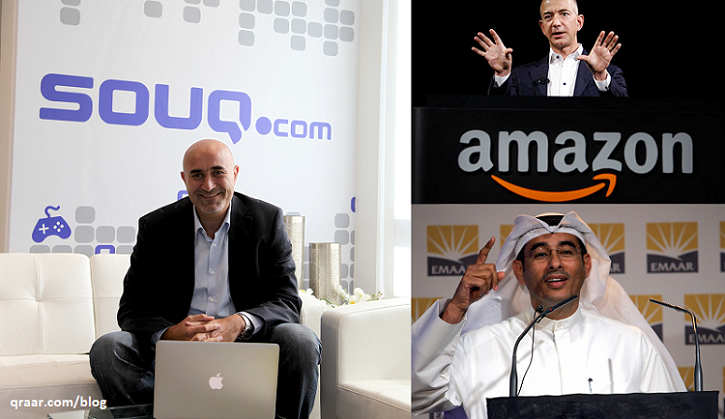 With so many twists and turns, this whole episode of Souq.com’s acquisition has more drama than a reality show. Reports have now emerged that Emaar Malls, the shopping mall and retail subsidiary of Emaar Properties and developer of The Dubai Mall, world’s largest and most visited shopping mall have now challenged Amazon’s bid with an offer of $800 million for Souq.com. The bid includes a $500 million convertible deposit.

It is being reported that there is an exclusivity clause in Souq.com’s negotiation with Amazon which means Souq.com cannot accept a counter offer for as long as its in sale talks with Amazon. The latest report also estimated the Souq.com-Amazon deal to be worth around $580 million which is less than previously reported $650-750 million.

The timing of this bid by Emaar Malls which is owned by Emirati real-estate tycoon Mohamed Alabbar is very interesting as he is set to launch his own billion-dollar ecommerce venture Noon.com within few weeks which is backed by Alabbar himself and the Public Investment Fund of Saudi Arabia. He previously had shown interest in acquiring Souq.com but reportedly the offer was too low.

The New York based Tiger Global Management which has major stake in Souq.com is reportedly driving the Amazon-Souq.com talks but the other small shareholders have not committed to a sale yet and they could very well block the deal. Some of these shareholders include Cape Town based Naspers Ltd, Standard Chartered Private Equity, International Finance Corporation and Baillie Gifford.

“A deal with Emaar Malls makes a lot more sense both strategically and financially. You have the owner of the biggest malls teaming up with a huge ecommerce platform. That would really drive consumer growth. And of course the bid is for a lot more than Amazon are offering.” – A source familiar with the situation told Arabian Business

The source further added “It isn’t clear whether every Souq shareholder is signed up to the Amazon offer, and they could still prevent the deal from going through. Ultimately, any shareholder selling out wants to get the maximum return. That isn’t coming from Amazon anymore, it is only coming from Emaar.”

I guess we’ll have to wait for an official announcement by Souq.com or the other parties involved to know that who eventually gets to buy the largest ecommerce platform of this region.