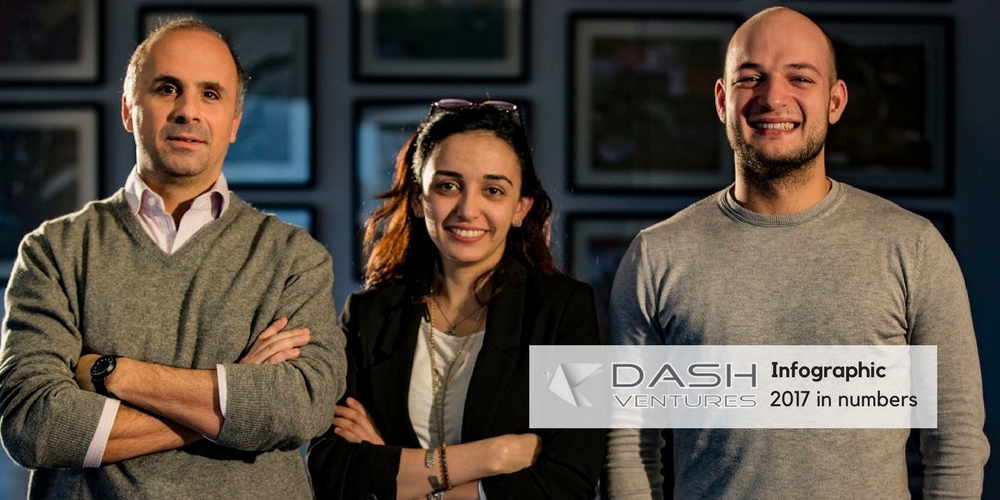 Amman-based DASH Ventures just published an infographic sharing some key numbers from the last year. For those of you who don’t now, DASH is one one of the leading VC firms of the region. Founded in 2011 as a private partnership, the firm has invested in companies like Jamalon, Kharabeesh, Altibbi, Arabia Weather and Akhtaboot.

The infographic highlights that the firm after screening 169 startups, made investments in 2, which means only 1% of the applications translated into actual investments. DASH had assessed 36 startups and completed due diligence for 10 of them to eventually make the two investments.

Not sure if this is a general trend in MENA but in terms of DASH, for every 100 applications they receive, 21 make it to assessment, 5 to due diligence and 1 end up receiving the investment.

Only 10% of the startups in DASH’s pipeline had a female founder which suggests that we still don’t have a decent number of female founders applying for venture funding. Again as the data only represents DASH’s numbers, it could mean a lot of things.

A very interesting piece of data in the infographic is DASH’s sources of deal flow and the most interesting number there is ‘events as a source for deal flow’. The kind of attention events get in the region, it would make you think that they are probably one the biggest source of deal flow for VCs but for DASH, that number is only 2.2%. Even social media has a higher number. So next when you’re tempted to spend your resources attending a startup event in the region because you think it would help you close a deal, think again. The biggest source for DASH was their own website with more than 50% of applications coming in from there.

40% of the startups that applied to DASH were looking for seed funding which is very close to the general trend in MENA, 37%, as highlighted in 2017 MENA Venture Report by MENAbytes.

Another very interesting stat is the geographic breakdown of application; even though DASH is strictly focused on MENA, they received applications from as far as Asia and North America. Also, if we look at the existing numbers, DASH has mostly invested in Jordanian startups but the highest number of applications that they received were from UAE, 35% of all the applications.

In terms of industries, more than 30% of the opportunities received by DASH were from the consumer services, followed by fintech.

More than 10% of the applications were from the startups that were using deep tech; blockhain, artificial intelligence, augmented reality, and virtual reality.

Here’s the complete infographic. Please give it a min or two to load depending on how fast is your internet connection.