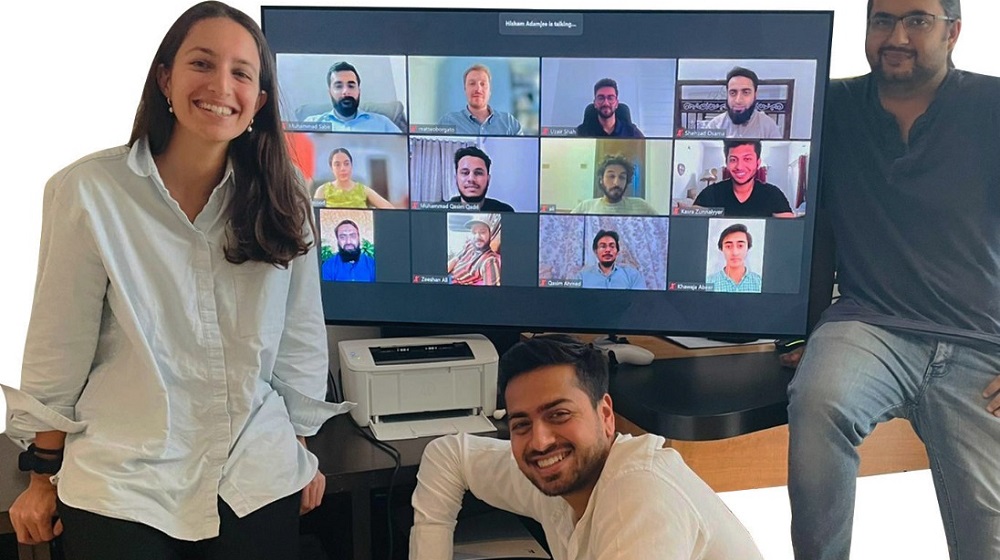 Karachi-based fintech CreditBook has raised $1.5 million in a seed round, it told MENAbytes today. The investment came from a mix of local and international investors, with Pakistan’s BitRate VC and Dubai-based VentureSouq leading the round. Better Tomorrow Ventures, Ratio Ventures, and Toy Ventures participated in the round, marking their first investment in Pakistan. Quiet Capital, i2i Ventures, and angel investors including founders of Indonesia’s BukuWarung and Colombia’s Rappi were also part of the deal.

Founded by a husband and wife team Hasib Malik and Iman Jamall, and Hisham Adamjee, CreditBook wants to digitize the small businesses in Pakistan. They’ve started with a digital ledger app that helps the Micro, Small, and Medium Enterprises (MSMEs) manage their finances. Launched in June 2020, CreditBook’s mobile app has already registered over 500,000 downloads on the Play Store, witnessing 450 percent growth in the last six months. The startup did not share the details about its active userbase but said that the app is being used by microentrepreneurs all around the country.

Available in six local languages, CreditBook enables small businesses that sell on credit to log all their credit transactions into the app and then send free SMS or WhatsApp reminders to their customers to request payments, “Through these reminders, payment recollection is as much as 3 times faster,” noted a statement by CreditBook.

A large number of these businesses even today rely on pen and paper for bookkeeping, spending hours on reconciliation, and other similar tasks. In addition to making it easy for them to remind their customers of the dues, CreditBook also helps businesses save time by maintaining a digital log of transactions – and that’s why it has been able to win a large number of MSMEs as its users – the majority of which have come on the app through word of mouth.

But in spite of this large userbase, CreditBook doesn’t make any money, for now – as the app is completely free-to-use. The startup is currently considering different monetization options but is apparently not ready to spill the beans yet, “There are many paths to monetization in this space when one thinks of the current contribution of MSMEs to Pakistan’s GDP and the opportunity to optimize a series of unaddressed workflows. We see multiple opportunities for collaboration between incumbents and startups around these workflows but it’s still early days for this space. At CreditBook, we are learning every day from our users while observing macroeconomic trends closely. We will need to experiment and validate some of these emerging trends over the coming months,” stated Iman Jamall, the co-founder of CreditBook, in a conversation with MENAbytes.

The startups operating in the same space in other emerging markets – including Khatabook and OkCredit in India, and BukuWarung in Indonesia have also followed similar models – with the focus on building a large userbase before turning on monetization. The two very obvious revenue streams for such companies include digital payments and lending. CreditBook could be considering both of them – among many other monetization options but its focus, for now, remains on solving for the bookkeeping needs of its userbase, “Our ultimate goal is to equip micro-enterprises with information to help them increase their income,” added Iman.

Faisal Aftab who co-led the round through BitRate VC, his newly established early-stage VC for Pakistani startups, said, “Being on the ground, I have been moved by the team’s ability to move fast and ship features regularly. This marks the start of a very exciting chapter for the company, given what we have seen from them with limited resources has been incredible, but to see what’s ahead is truly exciting for the entire ecosystem.”

DigiKhata, Udhaar, and Easy Khata (by Bazaar) are some of the other local players (/products) that compete with CreditBook. Commenting on what they make of the competition, CreditBook’s co-founder Hasib Malik, said, “It is always good, especially for a space like this, where customers have typically been ignored for so long. We are happy to see that there will be many options for this segment to choose which should hopefully foster more innovation and drive further value for any microenterprise or entrepreneur.”

“Our focus is to drive such value deeply and quickly. As a result, our strategic partnerships are a unique differentiator between us and the competition. We believe these partnerships allow us to build products and services that drive meaningful value for our customers quicker than any other solutions,” he added.

CreditBook now also has investors on its cap table who’ve backed similar companies in other geographies. Dubai-based VentureSouq is one of them. It has previously invested in Khatabook. Its co-founder and General Partner Suneel Gokhale, commenting on the investment, said, “We are always on the lookout for founders that are deeply tapped into their local markets, and are utilizing a user-centric approach as an advantage. The team at CreditBook have demonstrated their ability as market leaders with their understanding of their customers while bootstrapping the company, which has made their growth all the more impressive.”

The Pakistani startup plans to use the latest funds to grow its 15-member team multiple folds and grow its userbase.