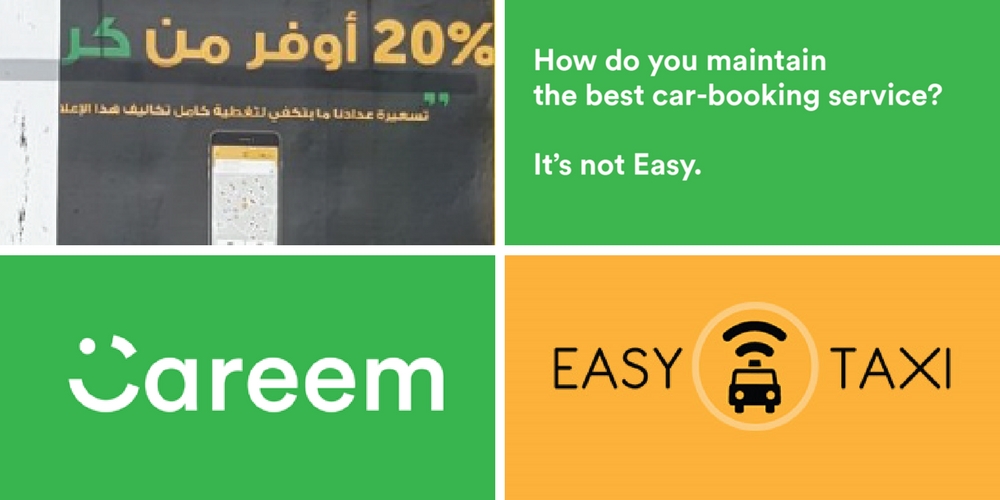 There have been many occasions when Careem has taken digs at Uber in different markets most recent of those being in Pakistan when a user tried to mess with them on Twitter by asking how they can book an Uber and Careem responded with this.

This time however Careem is on the receiving end in Jordan where one of its main competitor Easy (aka Easy Taxi) has started an ad war by placing billboards across Jordan’s capital Amman taking a dig at both Careem & Uber.

It started with a billboard which reads: “20% cheaper than Car(eem). Our fare can’t cover the cost of the rest of the billboard.” After placing the billboard, Easy shared its following picture on their Facebook page.

But, it didn’t stop there. Easy was in no mood to tease Careem alone. In another billboard, they are literally pushing both Careem & Uber out of the window. Easy’s Facbeook page shared this picture as well; on July 18.

Now, Careem has had enough. They probably wanted to counter the trolling so they posted a picture on their Facebook page earlier this morning taking a very subtle dig at Easy.

Easy was not going to hold back so they came back with a response within few hours only.

and if a response in English was not enough, they shared one in Arabic as well which reads: “Meet Reem. Reem made promises but never delivered them. Her friends have now lost trust in her. Don’t be C Reem.” This kind of loses the meaning/context in translation but its gold in Arabic.

That was the last post in the on-going war between the brands. Not sure if Careem will respond again.

People on pages of both the brands seem to be enjoying the friendly war between these two brands with their posts receiving more than usual engagement and some hilarious comments.

Being someone who is a part of the digital industry in Jordan, I am more than happy to see brands in Jordan producing content that includes their competition as well in some way even if it has to be through this friendly ad wars.

For me, it’s a sign of healthy competition and when different top brands worldwide including the likes of Mercedes-Benz & BMW are doing this, why not us?