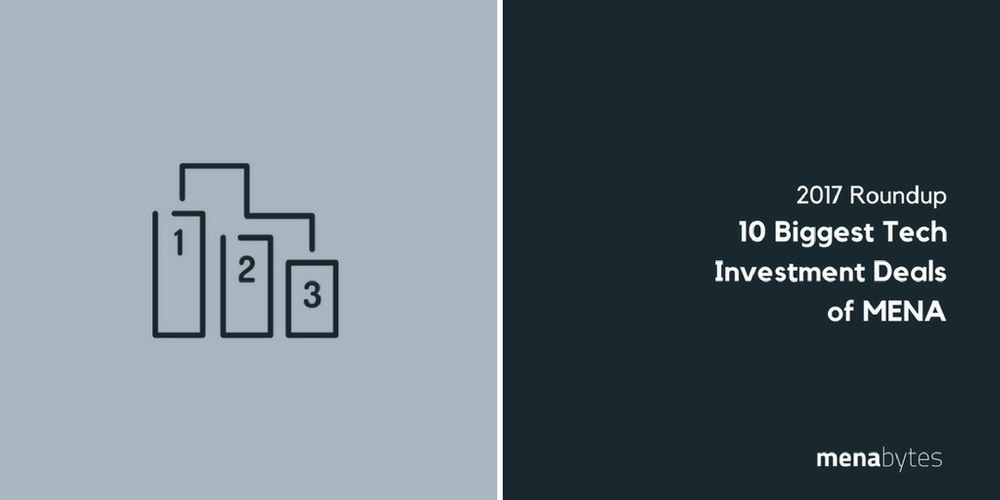 2017 was a big year for MENA’s entrepreneurial ecosystem. There was a lot of activity with the total amount of investment in the year reaching ‘almost’ half a billion dollar. Now if you dig deep into the numbers, half of it came from two big deals; Careem’s $150 million and Starz Play’s $125 million. But there were obviously some other notable deals too. We’ll be publishing a detailed venture report to highlight some number from more than 150 deals that we tracked but for now these are the ten biggest deals from last year.

Careem had become a unicorn last year in December when it raised $350 million from Raukaten and Saudi Telecom Company. At the time, the company had announced that it plans to raise another $150 million and they closed it last year in June at a reported valuation of $1.2 billion. The investment came from Saudi Prince Alwaleed bin Talal’s Kingdom Holding, Mercedes-Benz’ parent Dialmer, and some other investors. Careem later in the year also raised an investment from Didi Chuxing. It’s too early to say but that investment could eventually result in an exit. We won’t be surprised if the Chinese ride-hailing giant ends up acquiring our Middle Eastern unicorn.

Dubai-based on-demand video startup Starz Play that competes with Netflix in MENA raised a massive round of $125 million in July last year. The investment came from Starz, State Street Global Advisors, SEQ Capital Partners and Delta Partners. The startup that was founded in 2015 is aligned with Starz, a US-based global media and entertainment company with more than 56 million subscribers to its flagship US pay-TV channels, STARZ and ENCORE.

Fetchr, the leading logistics tech startup of the region secured $41 million in Series B funding. Apart from Careem, Souq, and Wadi, there had not been any notable startup that had raised a big Series A/+ round of investment during the last few years. Fetchr joined this club and became one of the best funded startups in UAE and the region. The startup raised this investment in May in a round led by New Enterprise Associates, a California based global venture capital firm that had led Fetchr’s 11-million Series A as well. Majjid Al Futaim Group, one of the largest conglomerates of the region also took part in the round. It was their first investment in a technology business.

The Saudi payments startup PayTabs received an investment of $20 million from undisclosed investors. It’s the largest ever round for a MENA-based FinTech startup. The startup plans to use this investment to expand into more than 20 markets over the next two years in the MENA, Southeast Asia, India, Africa and Europe. The funds will also be used for the product development and acquisitions.

Wego, the travel startup with dual headquarters in Singapore and Dubai closed a round of $12 million. MBC Group and Middle East Venture Partners were the investors. Wego at the time of investment said that they plan to to use the money to expand its regional footprint. This round has taken total disclosed investment raised by the startup to $57.5 million.

Bayzat is one of those rare startups that is selling two very different services and they seem to be doing it very well. The Dubai-based startup that sells HR solutions (SaaS) and insurance. Bayzat raised $8 million last year in two Series A rounds, with the first one in May last year by undisclosed investors that brought in $3 million and a $5 million round last month led by Silicon Badia and joined BECO Capiatal, Hamed Kaano Co., and Vision Ventures.

Egyptian healthcare startup that helps users look for doctors and book appointments with them started 2017 by raising the biggest (disclosed) investment round ever for an Egyptian startup; $5 million. This Series B investment was led by Vostok New Ventures and BECO Capital. The round was also joined by Silicon Badia. Later in May 2017, Vezeeta raised another $1.5 million; with Silicon Badia and BECO Capital joining as lead investors this time. Vostok New Ventures also participated in the round and were joined by Endeavor Catalyst.

Altibbi, the startup that is often referred as WebMD of the region raised $6.5 million as Series B investment in October last year. The investment was led by MEVP and Dash Ventures. TAMM Invest and Rimco Investments also joined the round. This round took Altibbi’s total investment to $8.5 million. They had previously raised $2 million in a seed round in 2015. Altibbi offers different services through its platform including the telehealth service through its mobile applications. It has more than 1.5 million pages of localized medical content in Arabic.

Shedul, a SaaS platform for beauty and wellness industry raised $6 million of Series A investment in June last year. The startup that started from United States has multiple headquarters, including one in Dubai. The investment was led by Middle East Venture Partners, and joined by BECO Capital and US-based Lumia Capital.