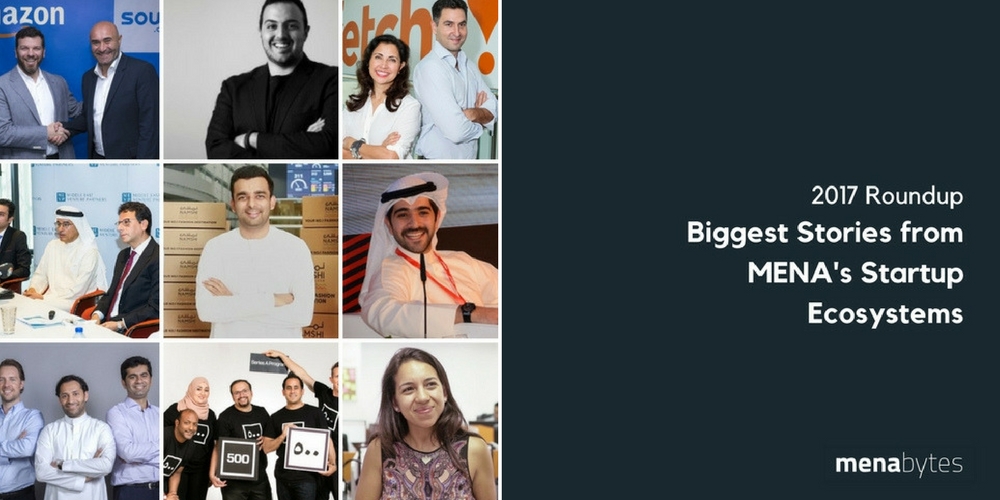 Until few years ago, there were only handful of startups in MENA. You could literally count them on your fingers. But things have been changing lately and saying that 2017 has been the best year for MENA’s entrepreneurial ecosystems won’t be an exaggeration.

New funds, big exits, huge rounds. 2017 had everything. We’ve tried to put together some of the biggest stories from the year. It is not an exhaustive list but we tried to scan through the stories from the whole year to come up with the following.

The rankings represent our understanding of the stories and the amount of engagement they created throughout the year. But you’re not supposed to take them very seriously. Think of this as a round-up of ‘some’ of the biggest stories from MENA’s startup ecosystems and that’s about it.

Why it matters: Biggest exit from MENA

Amazon’s acquisition of Souq.com was the biggest story to come out of the region in 2017 for different reasons. The deal had been in the works since 2016 and the initial price tag was $1 billion but the year started with talks falling through and Amazon walking away from the deal. Players like Majid Al Futtaim and India’s Flipkart were also named as potential acquirers but nothing really came through. Then in March, different sources reported that Amazon and Souq have resumed their talks, this time for a $650 million acquisition. In midst of all of this, Alabbar’s Emaar Malls countered Amazon’s bid with $800 million offer but it was too late by then. Amazon confirmed and announced Souq’s acquisition on 28th March but the details were not disclosed. MENAbytes was the first media outlet to report that acquisition’s price tag, $580 million, citing Amazon’s SEC filings.

Why it matters: Largest VC fund for MENA

Saudi Telecom Company, the state-owned largest telecom operator of the country announced the launch of Saudi Technology Ventures, a $500 million independent VC fund to invest in tech startups of MENA. STC had previously made investments in different startups through it’s VC arm STC Ventures. The company had also invested $100 million in Careem last year. Saudi Technology Ventures is headed by Abdulrahman Tarabzouni, a former Google Executive. It was said that STV will announce their first investment in 2017 but it seems that the legal formalities have delayed the matters a little and now the announcement of first investment could be expected early next year.

Why it matters: Largest Series B funding for a MENA-based startup at the time

Fetchr, the leading logistics tech startup of the region secured $41 million in Series B funding. Apart from Careem, Souq, and Wadi, there had not been any notable startup that had raised a big Series A/+ round of investment during the last few years. Fetchr joined this club and became one of the best funded startups in UAE and the region. The startup raised this investment in May in a round led by New Enterprise Associates, a California based global venture capital firm that had led Fetchr’s 11-million Series A as well. Majjid Al Futaim Group, one of the largest conglomerates of the region also took part in the round. It was their first investment in a technology business.

Why it matters: Second largest VC fund ever for MENA startups

Mohammed Alabbar, the Emirati real-estate tycoon behind Emaar and ecommerce platform Noon acquired a large stake in Middle East Venture Partners (MEVP), one of the leading VC firms of MENA in May this year. Four months later, they announced the launch of a $250 million fund for tech investments in MENA & Turkey. It’s the second largest fund focused on MENA-based startups. Called MEVFIII, the fund aims to invest in innovative early-stage and growth-stage tech companies of the region.

Why it matters: The biggest ecommerce exit of region after Souq

Namshi has always been one of those startups that let their work do the talking. Founded in 2011, the startup was acquired this year by Emaar Malls. Not entirely though. Emaar Malls bough 51% stake in the startup for $151 million which means $296-million-valuation. According to publicly available data, it had raised $33 million before getting acquired. To help you put it into context, Souq was acquired for $580 million after raising $425 million in funding. Later one of Namshi’s Co-founder & MD Faraz Khalid joined Noon as CEO.

6) Carriage was acquired by DeliveryHero for $100 million

Why it matters: A startup that had reportedly raised $1.3 million was able to sell itself for $100 million.

Kuwait-based food delivery startup Carriage was acquired by Delivery Hero in May this year. The acquisition was a big win for the startup that was founded only fourteen months before the acquisition. At the time, the details of acquisition were not disclosed. MENAbytes was the first publication to share the acquisition’s price tag to be ~$100 million. For a fourteen-month-old startup that had reportedly raised $1.3 million only in investments, it’s an exceptional achievement. But that’s not it, we have some more interesting scoop from the acquisition details that will be shared in the coming few weeks.

Why it matters: After closing $15 million, 500 Falcons remained the most active VC in the region.

500 Startups, the Silicon Valley headquartered VC firm that invests in early-stage startups all around the world had announced 500 Falcons, a $30 million fund dedicated for MENA startups in December 2015. The firm finally announced closing of $15 million out of the $30 million May this year and since then they’ve been the most active early-stage investor in the region having invested in different startups including TruKKer, Eventtus, Breadfast, Malaeb, Foodics, Mumm and many others.

8) Careem raised $150 million and an investment from Didi Chuxing

Why it matters: Careem continued getting attention and money from investors all around the world in 2018.

Careem had become a unicorn when it raised $350 million from Japan’s Rakuten and Saudi Telecom Company last year but it was still in the process of raising more to close the $500 million round. The rest of the money came earlier this year when it secured $150-million investment from Saudi prince and investor Al-Waleed bin Talal’s Kingdom Holding, German automaker Daimier, DCM Ventures & Coatue Management. The investment reportedly had higher valuation for the company than the previous one, $1.2 billion. Only two months after that, Careem raised another investment, this time it came from Didi Chuxing, Chinese ride-hailing company that happens to be the largest in the world serves 400 million users in more than 400 Chinese cities. The terms of investment were not disclosed.

Why it matters: One of the largest investment rounds ever in MENA.

Starz Play Arabia, a subscription video on demand (SVOD) startup that had started in 2015 raised $125 million in Series B funding. The startup was founded in alignment with Starz, a US-based global media and entertainment company, which means it has a different structure and model than what you would see in an average startup. We can perhaps think of it as Rocket Internet’s way of starting up a company where they look for founders and inject capital from the beginning to get things going. Regardless of the structure, $125 million is a pretty big deal. The investment had come from Starz, State Street Global Advisors (SSGA), SEQ Capital Partners and Delta Partners.

Why it matters: Souq finally has some real competition in both UAE & Saudi.

Noon, the $1 billion ecommerce platform backed by Mohamed Alabbar, Saudi Public Investment Fund, and some other regional investors created a lot of hype since the moment it was announced in 2016. It was supposed to be launched in January 2017 but was delayed for different reasons. It went through different issues throughout 2016 with different executives leaving it including the CEO, and CTO who did not even complete one month with the company. MENAbytes shared different exclusive stories about Noon including appointment of Faraz Khalid as their CEO and their launch date in UAE. Eventually, the platform went live, first in UAE & then in Saudi. The initial impressions and feedback about the platform makes it a very strong contender to Souq.

Why it matters: Careem had earlier acquired some startup but this was their first investment. Also, a big win for three-month-old Swvl.

Swvl, a Cairo-based transportation startup that connects commuters with private buses raised $500,000 from Careem. Swvl was co-founded Mostafa Kandil, a former Careem market launcher, and his two friends Ahmed Sabbah and Mahmoud Nouh. Pre-seed and seed investments are not that easy to come by, for the regional startups, and for Egyptian startups, they’re even more difficult. Considering that, it was a very big win for Swvl.

Why it matters: Another significant ecommerce exit from UAE.

JadoPado was the second ecommerce platform from UAE that exited this year. Founded by Omar Kassim, JadoPado had raised $8 million in two rounds by BECO Capital. The platform was not as big as Souq but had a very loyal userbase in UAE. Terms of the acquisition were never made public. All we know is that the JadoPado was closed down immediately after the acquisition and Noon ended up using a very big portion of it’s tech. Also, many JadoPado employees including the founder Omar Kassim had joined Noon and other Alabbar’s projects. But eventually, many of them left the company.

Why it matters: First app from MENA to reach the top spot of iOS App Store

Sarahah is an anonymous messaging website created by a Saudi developer that went viral around the first quarter this year. Audience of website was limited to MENA. It was popular in Saudi, Egypt, Morocco & some other countries. But when Sarahah launched its mobile apps later this year, it made headlines all around the world. That is because their iOS app reached No. 1 spot on iOS App Store and stayed there for few days. The app literally made it to all the leading publications in the world including Business Insider, The Independent, Mashable, and many others.

14) WaystoCap raises $3 million from Y Combinator and others

Why it matters: One of very few regional startups to have raised an investment from Y Combinator.

It’s not very often that we hear about Moroccan startups raising investments. Even though there’s a lot going on in the Moroccan startup ecosystem but investments are still very rare. WaystoCap however was an exception. The B2B ecommerce startup was able to raised $3 million after graduating from Y Combinator. The investment came from Y Combinator Battery Ventures, Endure Capital, and some other big names. A very welcome news for the Moroccan ecosystem.

Why it matters: Three competing startups raising multi-million rounds around the same time.

Souqalmal, Compareit4me & Bayzat have a lot in common. All three of them have made great use of the mandatory health insurance laws in the United Arab Emirates to sell it through their platforms. Another thing common among these Dubai-based startups is that all of them were able to raise multi-million dollar rounds this year. Between them, they raised $21.5 million. Souqalmal secured $10 million in Series B funding. Bayzat raised $8 million in two Series A rounds. And Compareit4me raised $3.5 million. Yes, different startups that compete against each other raised investments this year but not at this scale. This InsurTech group seems to have grabbed more eyeballs than anything else.

Why it matters: New VCs means relative easier access to funding for startups.

Why it matters: Easy access to pre-seed funding for deserving founders and startups

Kuwait-based Arzan VC launched a platform to seek applications for pre-seed investments. The whole idea of platform is to make it easy for the founders to apply and receive feedback. The platform obviously doesn’t guarantee an investment. But it offers founders with a quick window where they can go and seek pre-seed funding of upto $25,000.

Update: A previous version of this article mistaken referred JadoPado’s acquisition as acqui-hiring. It has been fixed now.