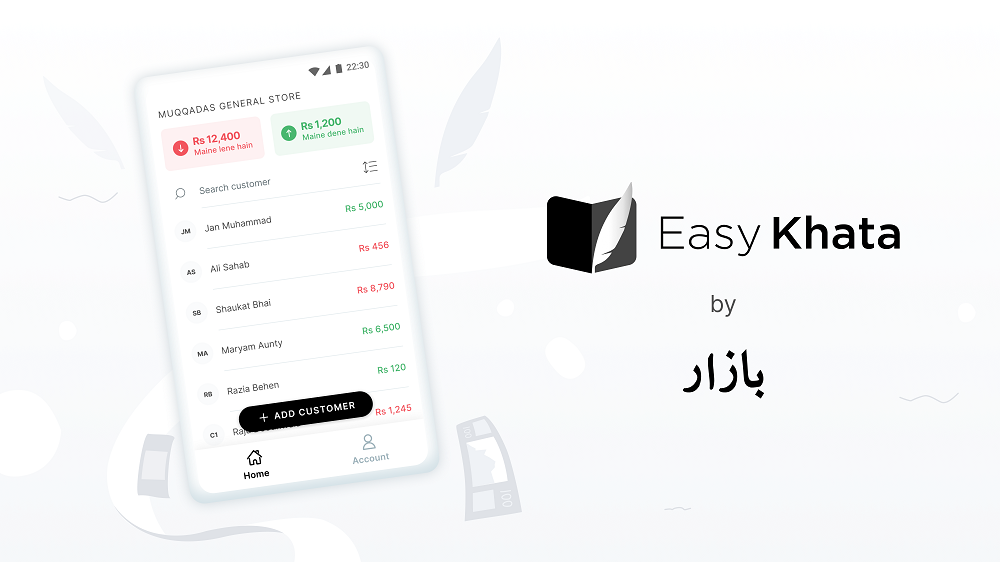 Karachi-based B2B ecommerce marketplace Bazaar has launched Easy Khata, a new mobile app that helps retailers manage their ledger and accounting. The app that was launched a little over a month ago has already onboarded over 100,000 active merchants from 400 cities and towns of Pakistan. Within days of its launch, Easy Khata went viral, consistently trending on top of Google Play, the company’s co-founder Hamza Jawaid told MENAbytes.

Bazaar’s main product is the ecommerce app that enables grocery retailers to procure inventory for their stores. Started less than a year ago, the startup has raised about $8 million to date, including $6.5 million in what was Pakistan’s largest seed round of the time earlier this year. It said that it is already working with some of the largest FMCG companies in the country and has served thousands of retailers in Karachi.

Speaking about why they decided to launch a digital ledger app, Bazaar’s co-founder Saad Jangda stated that the move is part of company’s mission to become the operating system for retail in Pakistan, “Traditional retail in Pakistan still has not seen technology play a major role in the value chain. However, with the launch of Bazaar we saw astonishing digital adoption of our commerce app, which reinforced our belief to introduce even more digital products including accounting, payments, lending, and commerce as part of one digital stack”.

The Easy Khata app comes with online backups, 3 free daily SMS reminders to customers, PDF reports, and a few other simple features to make the process of recording transactions and reminding customers of their dues easily.

The Karachi-headquartered startup is not the first player in Pakistan to have launched a digital ledger app for retailers. The concept that was pioneered by India’s Khatabook (raised over $110 million) was brought to Pakistan by the likes of DigiKhata, CreditBook, and Udhaar. All three of them have been in the space way before Bazaar but they’ve built companies around the digital ledger app and will potentially introduce fintech offerings (including credit) in the future.

Bazaar followed a completely different path to get here. It first launched the ecommerce marketplace and then listening to the feedback of its retailers decided to launch the digital ledger app, as well. The move makes them the only player in the space to offer both these services to merchants. Easy Khata, the startup said,  is one of the many products they plan to roll out for the retailers in the country, “We believe that speed has always been our key strength as we strive to serve this massive space. With a 40 people strong and growing product, engineering, and design team, we are accelerating on our journey to digitize and serve small businesses across Pakistan through one single offering”

With over 100,000 active users, Easy Khata will also serve Bazaar as a (somewhat) free channel for acquiring new customers (for its B2B ecommerce marketplace). Bazaar said it currently serves 17,000 merchants in Karachi. The startup is looking to expand to other cities of Pakistan in the next few months.

“With Easy Khata, we have already developed a large user base in most cities and a strong national brand for the local retail segment,” added the co-founders of the startup.