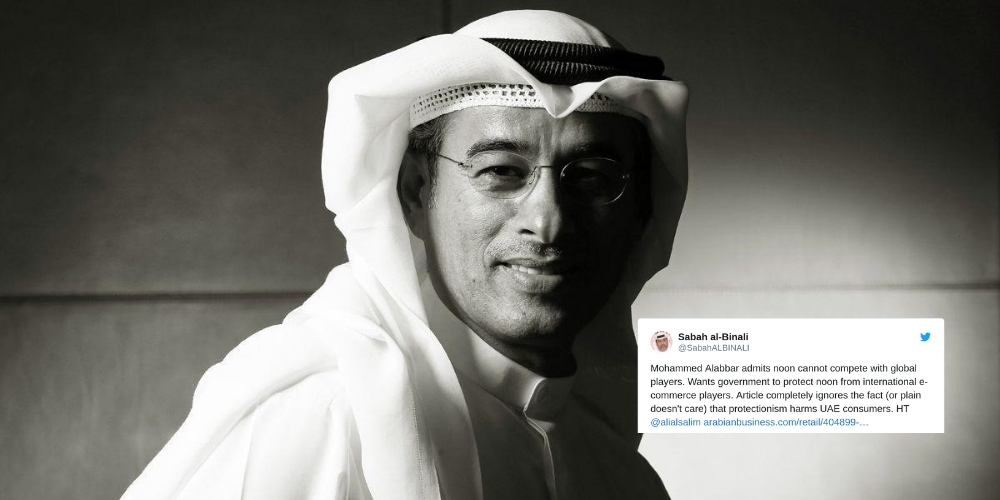 Mohamed Alabbar, the chairman of Emaar Properties and founder of Dubai-based ecommerce platform Noon gave a controversial statement, speaking to Al Khaleej Arabic newspaper earlier this week. As reported by Arabian Business, the Noon founder had labelled global companies like Amazon a ‘threat’ to the local market.

He said that government should work on creating laws to protect the national economy from global ecommerce companies – including 51% ownership of local companies or individuals in all the ecommerce, logistics and payments companies in the country.

The comments have received criticism from many in the ecosystem.

Ali Al-Salim, the co-founder of Arkan Partners, a Middle East focused alternative Investment consultancy and an active investor with some of the regional startups in his portfolio, labelled it a ‘poorly thought-out’ idea, saying, UAE needs to attract foreign investment, not deter it. He added that the country needs to develop its own global competitive advantages not hide behind protectionism.

Replying to his tweets he also noted that the likes of Amazon, Uber, Careem, Talabat, Maktoob and Souq don’t attribute their success to government protectionism of any kind, “If anything, they’ve pushed for less regulation.”

Jerusha Sequeira, an Editor with Argaam Plus, said, “Disappointing comments from Alabbar here. The UAE’s e-commerce scene has room for multiple players. If Careem could challenge Uber, why should Noon be afraid of Amazon?”

Racha Ghamlouch, a former Senior Program Manager with ArabNet, sharing her views on Twitter, said, “If Noon was a publicly traded company, Alabbar’s comments would have crashed its stock price. Instead of lauding the hard work the team has put in to make up for lost time, expand & improve, his words make it sound like the business is doomed.”

Baizat.net, a regional finance blog, on their Twitter, rightly pointed out that Alabbar is a an investor in foreign controlled Yoox Net-a-Porter Group that competes with Ounass, a luxury ecommerce platform by Al Tayer, an Emirati business group.

Alabbar also owns a large stake in Middle East Venture Partners, a leading VC firm of the region that has investments in many ecommerce, logistics and payments companies that don’t have local ownership, including HyperPay and The Luxury Closet.

A Dubai-based author, Mohammed Belhoul, wrote, “Foreign companies don’t ‘pose a threat’ on local economies. They create competition, and competition is necessary for any market to grow. He wants to create a monopoly on e-commerce and label it as “supporting local ownership of business.” His statements are very short-sighted, and completely reprehensible. This can seriously damage market growth.

Another Twitter user, Kumail Al-Lawati, noted, “Real companies don’t call for protectionism because their own #competitiveness protects them. Take Emirates as an example.”

Alabbar in his interview also vowed never to sell Noon to (or partner with) to any foreign company.

We’re not sure what exactly he means by ‘partnering up’ here but Noon very recently has announced their partnership with eBay and they sort of do qualify as a global ecommerce giant.