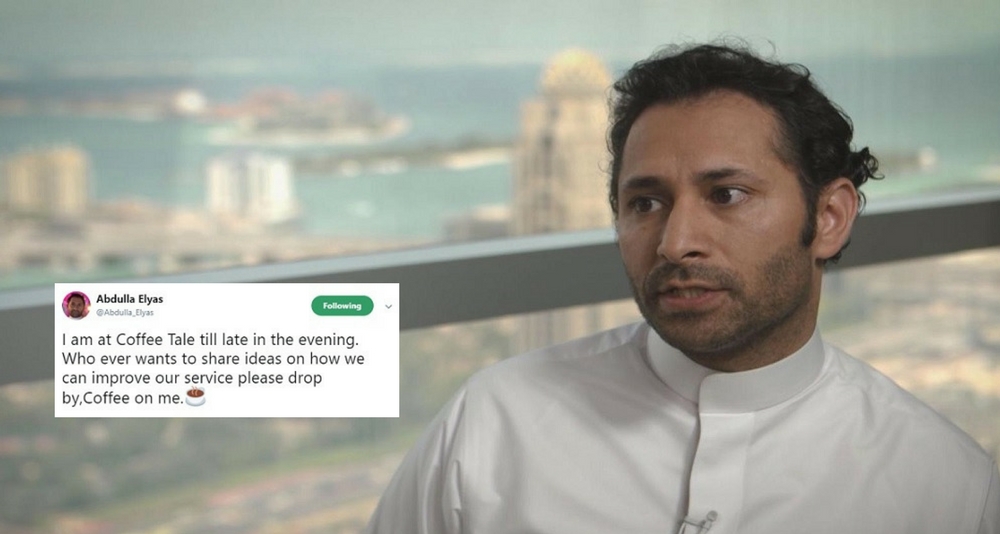 Abdulla Elyas, Co-Founder of the ride-hailing startup Careem invited people to join him for a coffee last Friday at a local cafe in Riyadh to share ideas that could help improve their service. Abdulla, who is also the Chief People Officer of the company and is the driving force behind its success in Saudi sent out the open invitation on Twitter.

I am at Coffee Tale till late in the evening. Who ever wants to share ideas on how we can improve our service please drop by,Coffee on me.☕️

Not sure how many people actually showed up at the cafe but there were some on Twitter who suggested improvements, replying to his tweet.

This gentleman wants to have PDF invoices

Some took it as an opportunity to register their complaints

I cant enjoy Careem Services because i have a negative balance in my account. I dont know why do I have this. So i am using @Uber_KSA pic.twitter.com/65DvSsmFfz

and some wanted flat rates

Have u comsiderd a fixed trip which has a fixed price that can both customers and capatins are satisfied !

Btw,
I am a captin

It’s not the first time a Careem Co-Founder asked users to share ideas to improve their service. Mudassir Sheikha had also reached out to users on Twitter in December last year, asking them to recommend the new features they would like to see in Careem apps. He had later explained that the idea was inspired by Brian Chesky, Airbnb’s Co-Founder & CEO.

this was indeed inspired by @bchesky

Both Mudassir & Abdulla replied to most of the users in these threads which suggests that they were very serious about the whole thing and were actually looking for ideas. Whether they actually go ahead and implement any of those ideas however is a different story.

With both of them engaging with users every now and then, the only Careem Founder now missing from the Twitter game is Magnus Olsson. Yes, he’s not on Twitter.

It may seem like a little thing but engaging directly with your users even if you’re CEO of a unicorn is really important. At the end of the day it’s them who have turned you into one.